The year 2020 saw digital camera shipments drop to a new low of 8.9 million units from 121 million units in 2010. It was thought it couldn’t get any worse and, indeed, shipments stabilized in 2021. So why do sales appear to be plummeting again?

Looking at camera shipments (which are different but closely related to sales) – as reported by CIPA – it’s actually not useful to focus on unit counts as it encompasses a wide range of different types of cameras.

The CIPA itself separates the sector into built-in, DSLR and mirrorless types, recording both the number of shipments and their value. When you look at this, it’s clear that since 2014, built-in cameras (solid blue line) have ceased to be the financial engine of the industry; this coat has moved towards the DSLR (solid red line), as shown in the figure below. 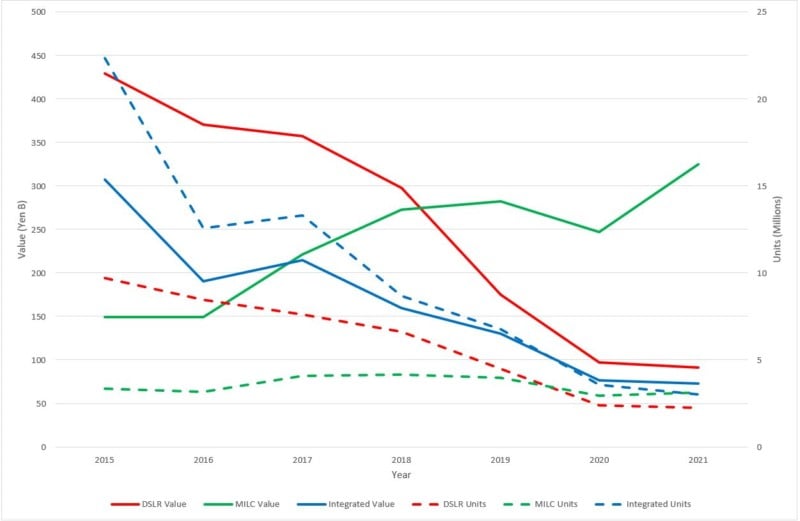 In fact, the picture is much more complex because the DSLR sector itself was in decline, but was not disintegrating as quickly as lens-integrated cameras. This is clearly demonstrated by the increase in the value of mirrorless shipments (solid green line) from 2016, even though more DSLRs were being shipped. In 2019 – a historic year – mirrorless cameras were worth far more than DSLRs and in 2021 more were shipping.

The message is clear: DSLRs are on their last legs, with the volume and value of shipments now shifting to mirrorless cameras. Moreover, the disappearance of the integrated camera continues, shrinking inexorably into increasingly specialized areas of use. Of course, these numbers only describe the industry as a whole and do not show details for individual manufacturers. 2016 was probably also a landmark year for mirrorless, as it was probably when Nikon and Canon finally realized they couldn’t stop Sony’s inevitable march and had to join the club – and not in the way shy than the EOS-M and System 1 lines did. It was a pivot in its own right that saw both manufacturers launch new pro-oriented systems in 2018.

Since then, Nikon has had its own financial troubles which have caused it to focus almost exclusively on the Z system, phasing out production of DSLRs and all-in-one cameras. Cannon had a bigger pad to land on, but actually follows the same path. The built-in cameras are largely done away with and the EOS-M seems destined for the history books. Given that Canon and Nikon account for 90% of DSLR sales, it remains to be seen how long this segment will survive in any volume. On the contrary, COVID has accelerated the decline of these two areas because it was simply not worth restarting production after the plant closures.

All of this shows us how we got to the end of 2021, but business is about the future, not the past, and manufacturers will have largely committed to a product design, release, and shipment schedule for 2022 and beyond – despite the COVID-related issues that have affected production lines and the associated supply of manufacturing parts. With the first quarter now over, we can get a glimpse of how the year might unfold and that gives a pretty grim reading on face value.

As the green line shows, the start of the year was slow and the surge in shipments that normally occurs in March simply did not occur. More than that, the healthy shipments of September, October and November of last year did not materialize. 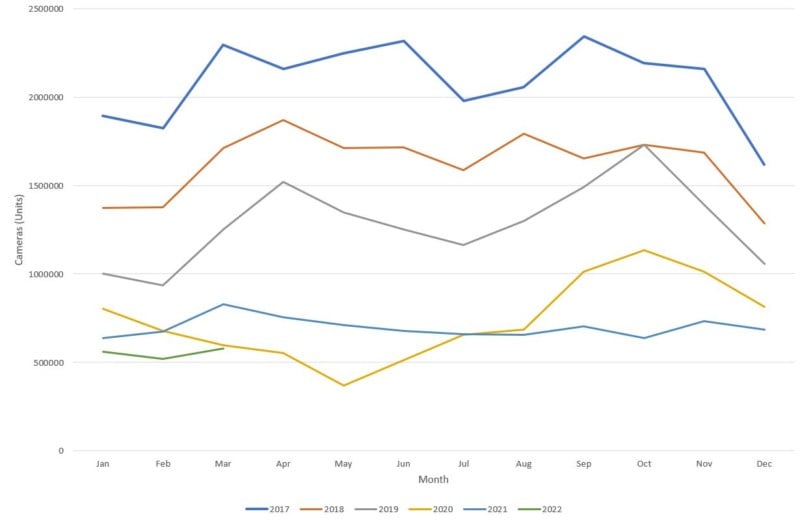 The cumulative total of shipments for the first quarter is 1.65 million, compared to 2.14 million last year, compared to 3.18 in 2019. What is worrying about this figure is that it has almost halved from pre-COVID levels. So where are the losses coming from?

Unequivocally, they concern a reduction in the number of integrated cameras shipped: some 3.01 million shipped last year, which represents 36% of all models. That percentage now sits at 26%, a steep drop, with mirrorless up to 43% from 37%. Counterintuitively, DSLRs are up 31% vs. 27%, however, this won’t have a happy ending as it just reflects that it doesn’t perform as badly as the in-camera category.

Specifically, where is the money earned? Last year, 66% came from mirrorless cameras and that figure now stands at 69%, with DSLRs rising from 19% to 18% and built-in cameras from 15% to 13%.

Mirrorless cameras are where the money is in two ways: first, there are more units shipped than other segments, and second, the unit value is significantly higher. In fact, the unit value of integrated models and DSLRs is about the same, and the mirrorless one is three times higher.

The latter reflects both the cost of newer models (which are mirrorless) and what professionals and enthusiasts are buying into these systems. DSLRs remain an important value segment where manufacturers can make money, but only by selling older models. There is clearly a demand, but it is decreasing.

Built-in cameras are an interesting segment as they move from a low-cost, low-budget item to a high-value luxury item (like the Sony RX100). So while built-in cameras are expected to all but evaporate in 2022 – Canon is closing its main Chinese camera factory and reducing shipments from 1.2 million to 0.67 million units – it will remain profitable in niche areas.

So what are the takeaways for the rest of the year? The first quarter is an excellent predictor of total shipments for the year, suggesting manufacturers will reach 6.6 million units, up from 8.4 million last year. However, this reflects a manufacturer-induced reduction in the number of integrated cameras and it seems likely that mirrorless units will be similar to, or even exceed, last year’s quantities.

More than ever, volume and profit are being made mirrorless, which means manufacturers need to be both dispatch and sale in order to earn a healthy income. Canon and Sony will fight for these large shares, but all eyes will be on the fortunes of Nikon and Olympus. To a lesser extent, it will be interesting to see how many DSLRs are delivered. Will Nikon largely withdraw from this segment? Will Canon increase its segment share and will Pentax be able to benefit from its niche expertise? There is undoubtedly money to be made in the camera market, but it will take a keen eye and an effective strategy to perform well.