In this behind-the-scenes video, I’m going to show you a rather intricate photograph I took in our garage studio. Using strobes, LED lights, a crazy light modifier, and ACDSee’s new photo-editing software, Gemstone, this final image turned out to be much more interesting than I initially thought.

First off, one of my favorite photography genres is definitely sports portraiture. Unlike live sports photography, where you’re at the mercy of capturing the action as it happens (or doesn’t happen) in front of you, sports portraiture allows you to create a more surreal image in the studio or on square. A few weeks ago, I had the pleasure of photographing mega athlete Gabriela Del Mar and testing out some new lighting setups with her. Gabby is an amazing pole vaulter (watch this video here), but since she also does CrossFit, gymnastics, weightlifting and light boxing, the sky was literally the limit on the kind of athletic images we could create . We went with boxing, and I think the final picture turned out to be quite impressive.

When creating this image, I knew I wanted something colorful and dramatic at the same time. Instead of lighting Gabby like a traditional fighter with strong side lighting and lots of shadow detail, I instead opted to light him completely as a silhouette and then add refined lighting above the silhouette dark.

The backlit image was first created by pulling two Profoto B10s onto my seamless white paper. One of the B10s was fitted with a Profoto OCF 1×4 strip box to help soften the light, and the second light on the right of the camera was simply taken bare bulb to create the lighting effect weakest spot. I then made the entire background red by mounting red color correction gels, which colorized my white paper. Finally, to keep the light from bouncing off my ceiling and white walls, I used a V Flat World Black and White V Flat on the right side where the white closet wall was. The left side of the staging area had a dark canvas background, which reduced the amount of light reflected in that direction.

Now that I had Gabby backlit with a red light and her body was a completely black silhouette, it was time to add a key light. Since I wanted most of her body to be backlit and completely black, I knew I couldn’t use a large light modifier that would light up the whole studio. If I had used a small softbox with a fabric grille or a tight reflector dish with a honeycomb grille, these light modifiers would probably still produce too much fill light in such a small studio space. . Instead, I decided to use one of my favorite light modifiers, the Westcott Optic Spot. Unlike other light modifiers I own, the Optic Spot allows you to tightly focus your light with precision. It’s still a harsh light that looks like sunlight, but it also doesn’t spread throughout the studio. Also, since it has throwing blades, I’m able to create all kinds of shapes and patterns that look really cool on a silhouette model.

Below is an example of the red gelled version of this setup and an earlier non-gelled version that led me to the final version shown in the video. Keep in mind that the optical dot had a different shape for the white background image and looked more like a v-corner on the red gel image. 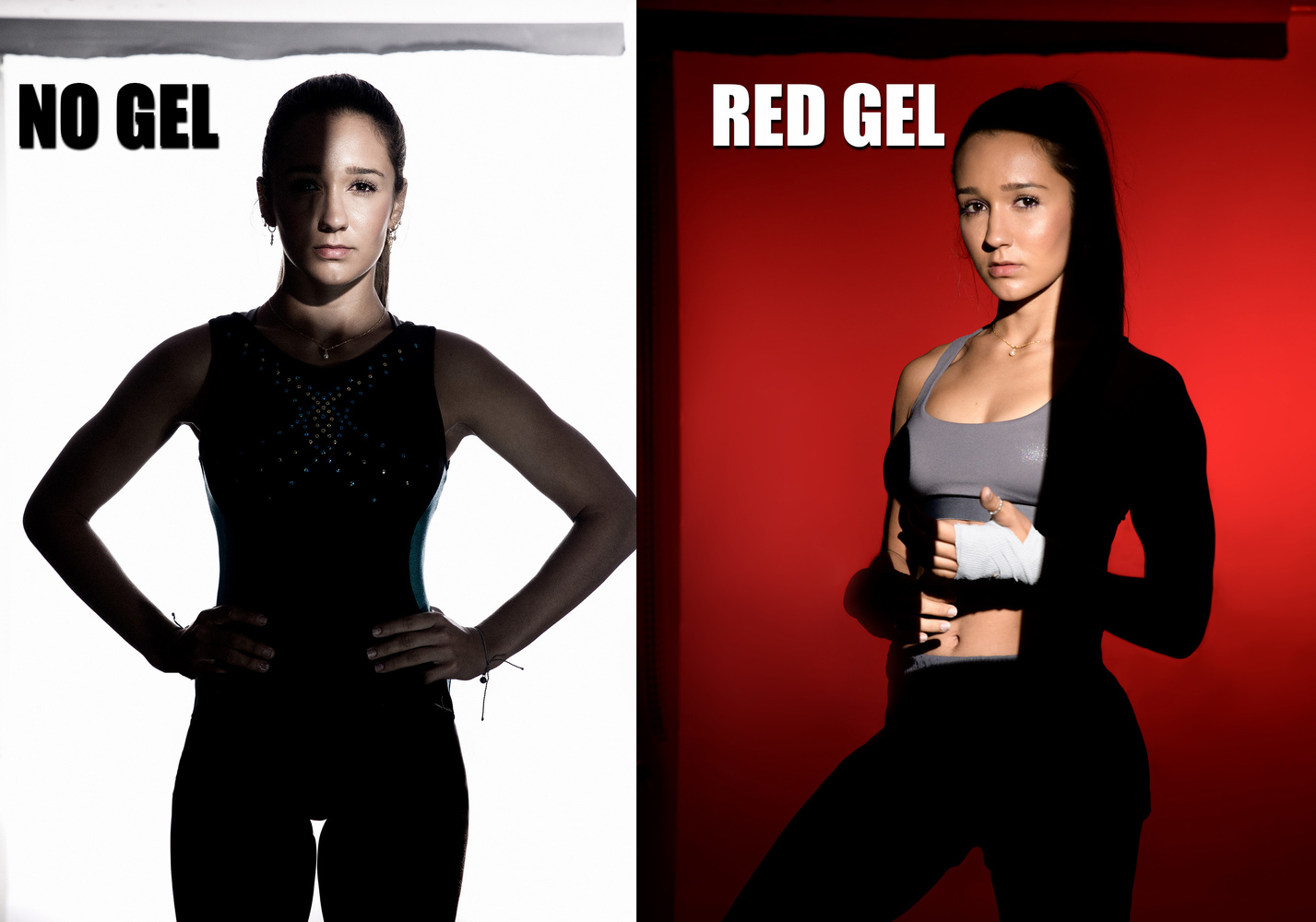 A moment of spontaneous discovery

After taking a few images with the lighting setup above, I started wondering if I could fit some of the studio’s overhead LED lights into my image. When I built this garage studio a few weeks ago, I installed these awesome Lumary Smart LED lights in the ceiling which not only let me control the white balance, but also RGB. These are great when you want to add a bit of fill light to your photo shoots or create dramatic lighting during video production or in a background setting. You can see the location of the ceiling lights below. 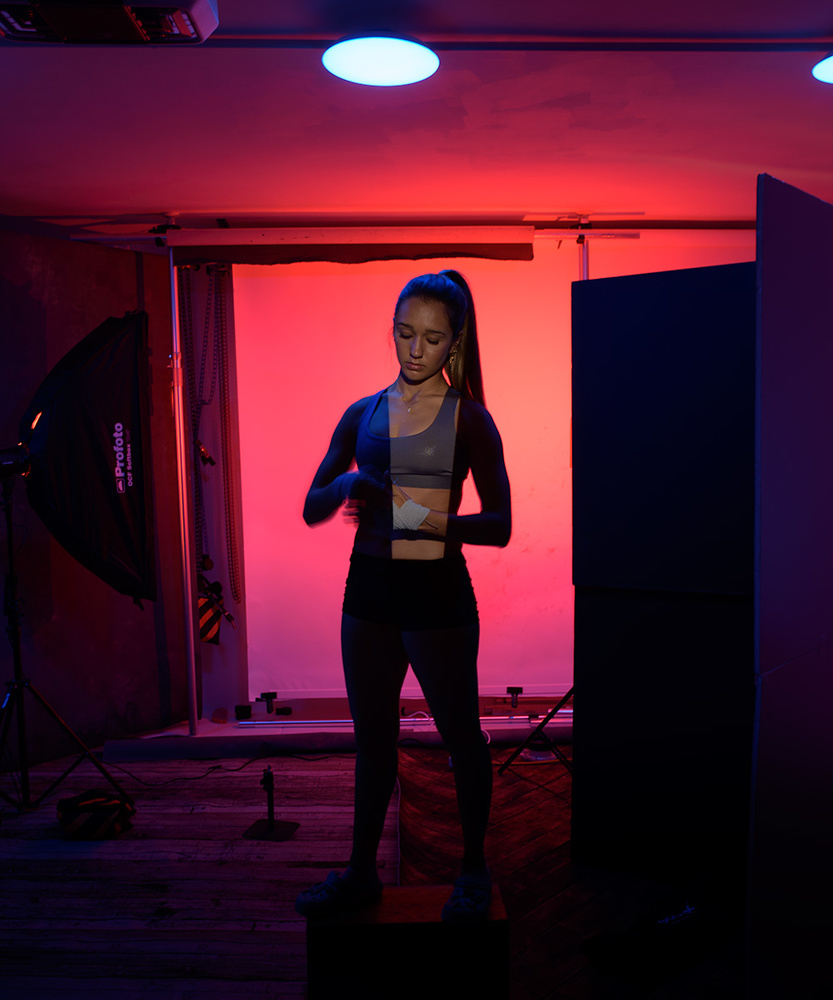 With the lights set to a dark blue color, I thought maybe I could slow down my camera shutter to burn off some of that blue light that I was seeing with my natural eyes. When the camera is set to 1/250th of a second, all ambient light in the room is completely black, leaving only the strongest flash the chance to affect your exposure. An easy way to introduce any ambient light into your flash images is to simply slow down the shutter speed to 1/100th, 1/50th, or 1/25th of a second. The longer you leave your shutter open, the more ambient light will burn into your images. The trade-off, of course, is that if the shutter gets too long, you’re going to get a lot of motion blur from your inability to hold the camera perfectly still. Blur can also be introduced if your subject is also moving. I found the sweet spot to be around 1/10th – 1/20th of a second. If you need even slower shutter speeds, you can always use a tripod and have your subject stay as still as possible.

Once I had captured a handful of images, some with and without the overhead blue lights burning in exposure, it was time to edit the raw files. Since this concept video was sponsored by ACDSee, they asked me to try their new raw editing software suite called Gemstone. At first I was a little hesitant to rely on new software that I had never used before to edit such a complex image, but they reassured me that if I could navigate Photoshop and Lightoom, Gemstone would be a child’s play. in comparison. 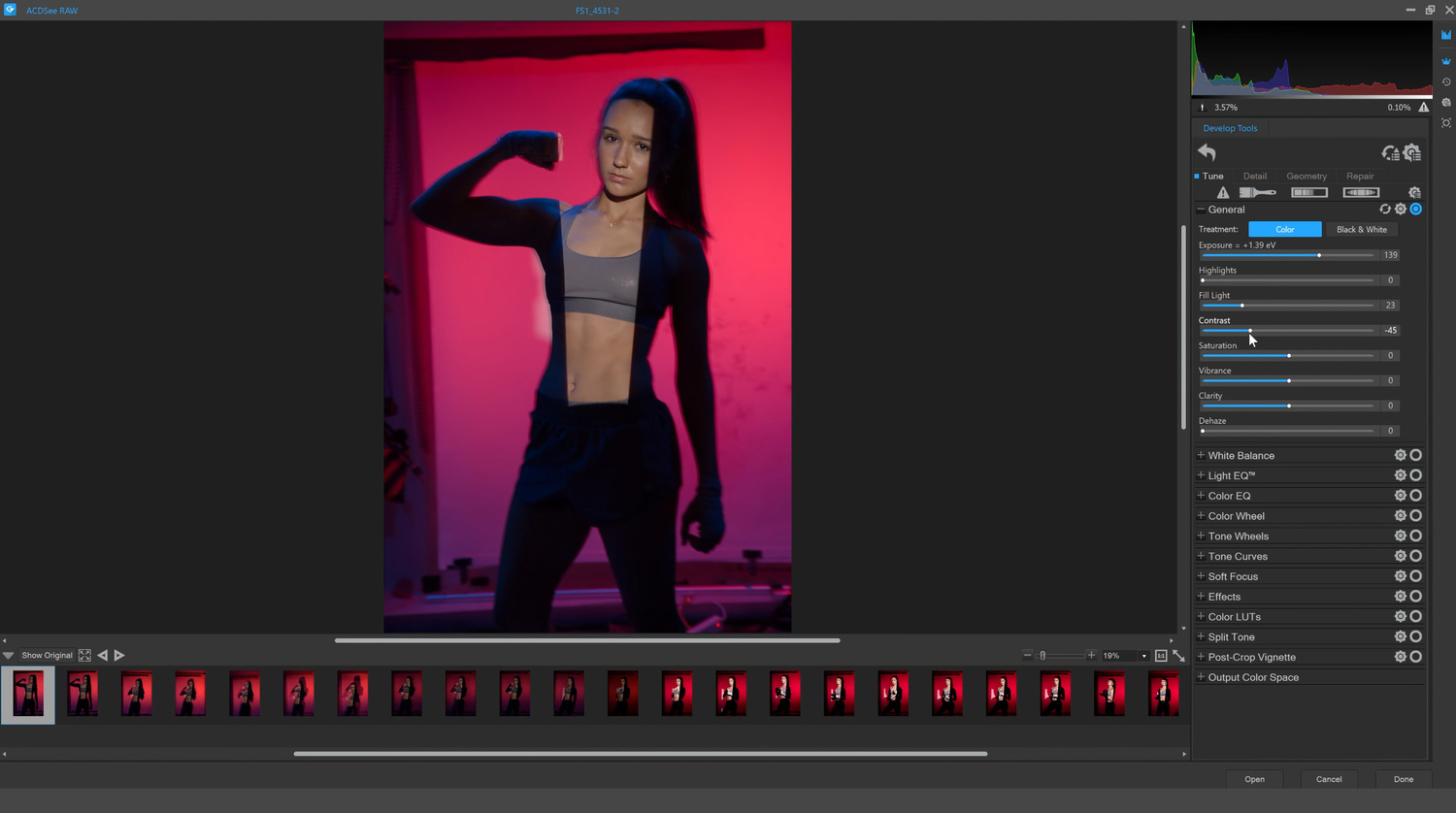 You can watch the post-production steps in the video above, but the basic idea was to clean up the contrast between Gabby’s face and abs, which were lit by the Optical Spot, while keeping the parts the darkest parts of her body left in shadow. . Since everything was shot almost perfectly on set, I only needed a few contrast adjustments using the Light EQ sliders and some color adjustments using the Color EQ sliders. Once the final selected image was adjusted in ACDSee Raw, it was then imported into Gemstone, where I tweaked a few distracting elements on the background. I also adjusted the cropping to straighten the background paper. As a finishing touch, I used a subtle gradient map to help blend some of the magenta and blue tones through the shadows and highlights, which resulted in the final color note.

Overall my experience with Gemstone was excellent. Recently, Fstoppers writer Gary McIntyre wrote an extensive review of ACDSee’s Gemstone software, and his impressions were pretty much the same as mine. Personally, I don’t mind paying upwards of $240 a year to subscribe to Adobe’s Lightroom and Photoshop subscription model, but now, typing in that fee, I can see how expensive it is to retouch my photos throughout the year. If you love the layout and features of Adobe software, but prefer owning your favorite photo editing software instead of renting it every month, Gemstone might be the perfect software for you. Head over to the Fstoppers Gemstone download page for a trial of the software, and if you like the software, you can purchase the full unlocked version for a fraction of what Adobe charges annually to use their similar software suite.