Much to the surprise of many, photographing athletes doesn’t always mean you’re a sports photographer. To be honest, I don’t know anything about sports at all.

My photography of athletes is best captured by the shape they create and how my lighting can accentuate it. In many ways, my lack of interest in sports gave me the advantage of not being struck by any of their accomplishments. But what happens when the person you’re photographing is a model and doesn’t do exactly the sport you want them to represent?

That was the challenge I faced when photographing a male model for a sports drink. We were creating a series of basketball images, and after the casting, it was obvious that he had the best look of all. With an abundance of enthusiasm and a willingness to work hard to get the look right, I, along with the creative director, started coaching him (no pun intended) into good sports form. It was an approach that relied heavily not on basketball, but on hitting the right target and the lights doing the rest. Think of it more like how a theater would pre-light a set so that a room can convey the appropriate mood to the audience.

We knew that with an extended light setup (around 15) the highlights would carry the image towards the viewer at harsh angles, which would create lots of cross lines in the frame to capture them. Being on set was more like watching a choreographed dance than a sports shoot. We had markings on the floor for everything from counterpoint for light metering to take-off and landing points so the model was stretched enough to sell movement. As I always do on my photoshoots, we maintain that everyone is equal, from the assistant to the client to the photographer. In doing so, we make sure everyone feels comfortable contributing to the final image. In this photo shoot, it was the key to a collaboration between art and athletics that produced these images. 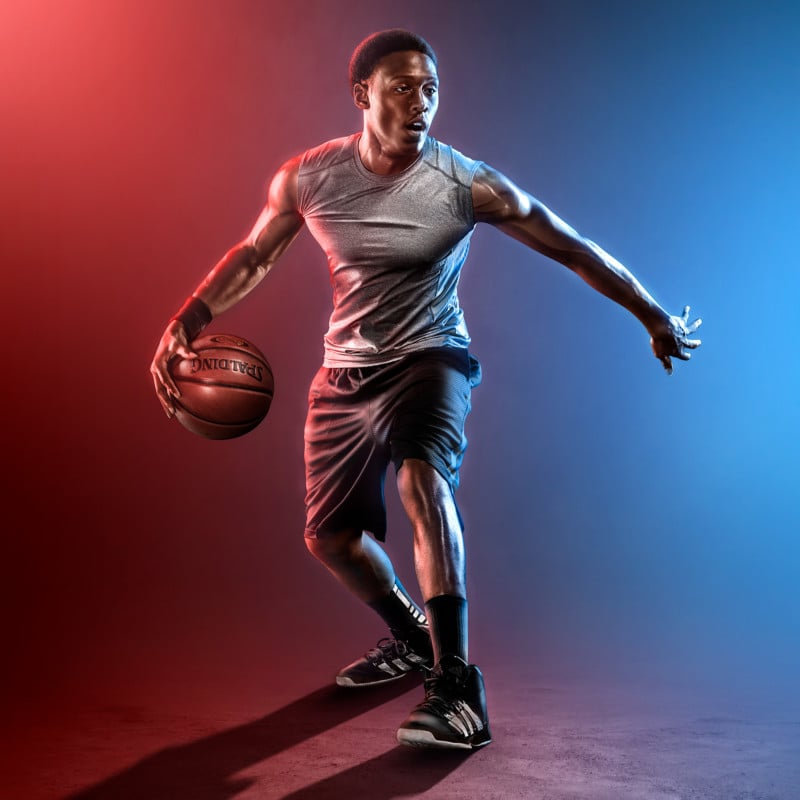 In many ways, having the team working together to lead the athlete allowed me to focus entirely on the lighting. I went through the set again and again, measuring and re-measuring with a light meter to keep the highlights from spilling over the top of the model. We wanted to have a feeling of separation where the dynamics of the color separated from the athlete and gave them more pop against the background. Instead of going with red and teal, which is becoming all too common, we went with a harder red-blue combo. Shadows are best absorbed using a darker combination, however, when combined with hard non-gel lights allow for greater perceived depth in the photo. With all the lights on, we actually found that almost 75% was behind the subjects’ uni and 25% in front in the form of overlays and fills.

When it comes to on-camera action, being in a closed studio and coaching a model in positioning allows a photographer to worry less about motion blur on full-power strobes. Too often with pro athletes they take on a form they are familiar with but which is very fast and can only be frozen by cameras with extreme shutter sync speeds. With this production, the model essentially froze in action at a time when there was a bit of a delay. The move is more like a ballerina jumping than a basketball game heading for the hoop. Slowing down the motion allowed me to shoot with the camera closed at f/16 for maximum sharpness. It’s a trick I’ve learned over the years, especially with track and field athletes. Often runners think that looking fast past the frame means sprinting as fast as possible across the board. This is actually not the case, because finding where the form feels fastest for a runner is more effective than being fast in the first place.

With the lighting set, I was able to hang out with the model as we jumped in front of a mirror in the studio to see what shape we had created. It also helped me see what minor details of his jump could be perfected for the shot so I could get as much of it into the camera as possible. One mannerism I notice whenever I photograph an athlete in the air is how their hand sells the shot. For some players (usually football receivers), the hand opposite the ball clenches into a fist and can be awkward. Basketball players tend to do the opposite in that their hands are wide open, but this can also draw the viewer’s attention. With this shot, I was able to help the model find a hand position that fit into the movement of the jumps and made the shot look a bit more graceful. 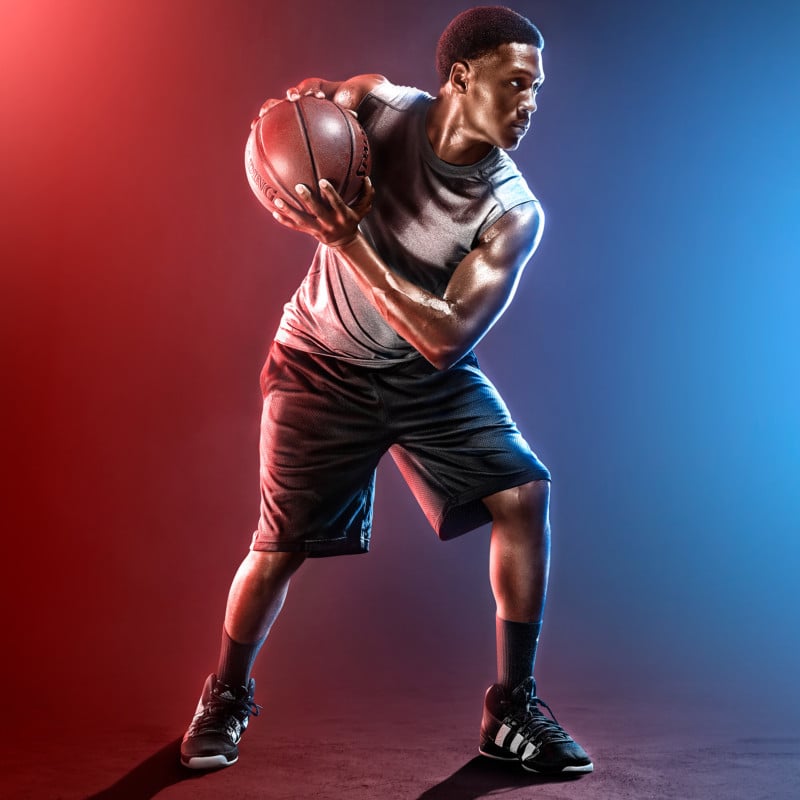 The last piece to create a realistic basketball piece with a non-basketball model is their line of sight. When a jump or layup is photographed in the studio, there are several ways to force the perspective of a real basketball game. The first is fairly obvious in that the photographer should be as low to the ground as possible and, if possible, build a stage to allow shooting angles below ground level. For this shoot, we didn’t build a raised stage, but instead raised the lights much higher than they would be on a standing portrait. This frees up space for movement and softens the touch on the model/athlete. However, over the years I have found that the models sell a motion base on the space around them rather than the invisible enclosure of the photo. For this reason, we taped a mark on the lower part of the light key for the model to direct their body towards. By aligning his eyes and head with the “X” stuck on the key, we made sure that all the lights around existed on the correct axis from the line of the model’s body.

Hope this helps those photographing athletes on set. And I also hope it helps photographers who don’t do sports to know that they don’t need to limit themselves because of it. The human body is an art form and sport is its expression. Being able to dynamically navigate lighting is one way to call that expression and make art out of it.