I got a preview version of the Noiseless AI extension which will be released to Luminar Neo users on August 30th. It’s not quite finished in terms of GUI, but the basic functionality is there. My copy only runs Rosetta on my Mac Studio, but when released it will be Apple Silicon Native.

Digital editing has made the problem much easier to deal with. These new editing and noise removal techniques can allow us to push our equipment beyond what we could do just a few years ago.

As a landscape and night sky photographer, I’m well aware of the need for noise reduction, and I’ve been a fan of Topaz DeNoise AI since it became available and earlier versions for years.

Of course, the folks at Skylum would like to keep you in their Neo ecosystem, so we’re starting to see the equivalent of plugins or extensions in Luminar Neo. The first was the HDR extension which appeared last month, and Noiseless AI is the second. By the end of the year, Sklyum says Neo will offer a total of seven expansions.

How Does Noiseless AI Work?

You launch it from the selection menu. Skylum says it will work on any file type, but I did all my work on raw files.

The extension will make a recommendation for the amount of noise reduction, or you can choose your own. There’s also a slider that we see on most noise reduction offerings, and it’s for color noise reduction. And there is an option to recover original detail and increase sharpness, which I consider to be edge enhancement.

I opened a low-light sunset file with Noiseless AI, and the noise was easy to see. (It’s compressed and shrunk a bit to fit our page, but you can see the noise). It appears as spots of various sizes and other flaws, most easily visible in the brightest parts of the sky. Here is an enlarged view of part of the frame at 300% magnification. 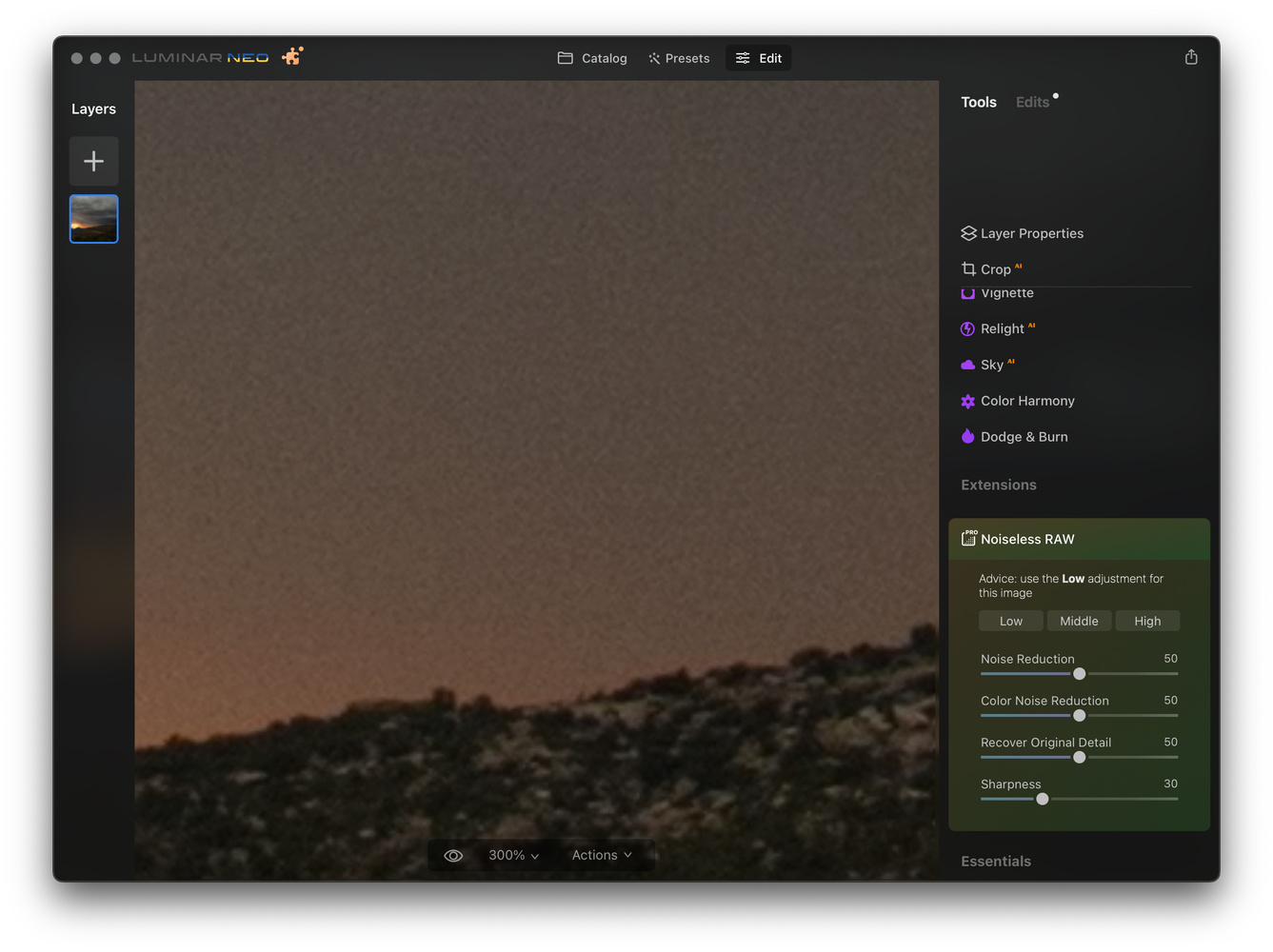 I then selected the medium noise reduction, and here is the result: 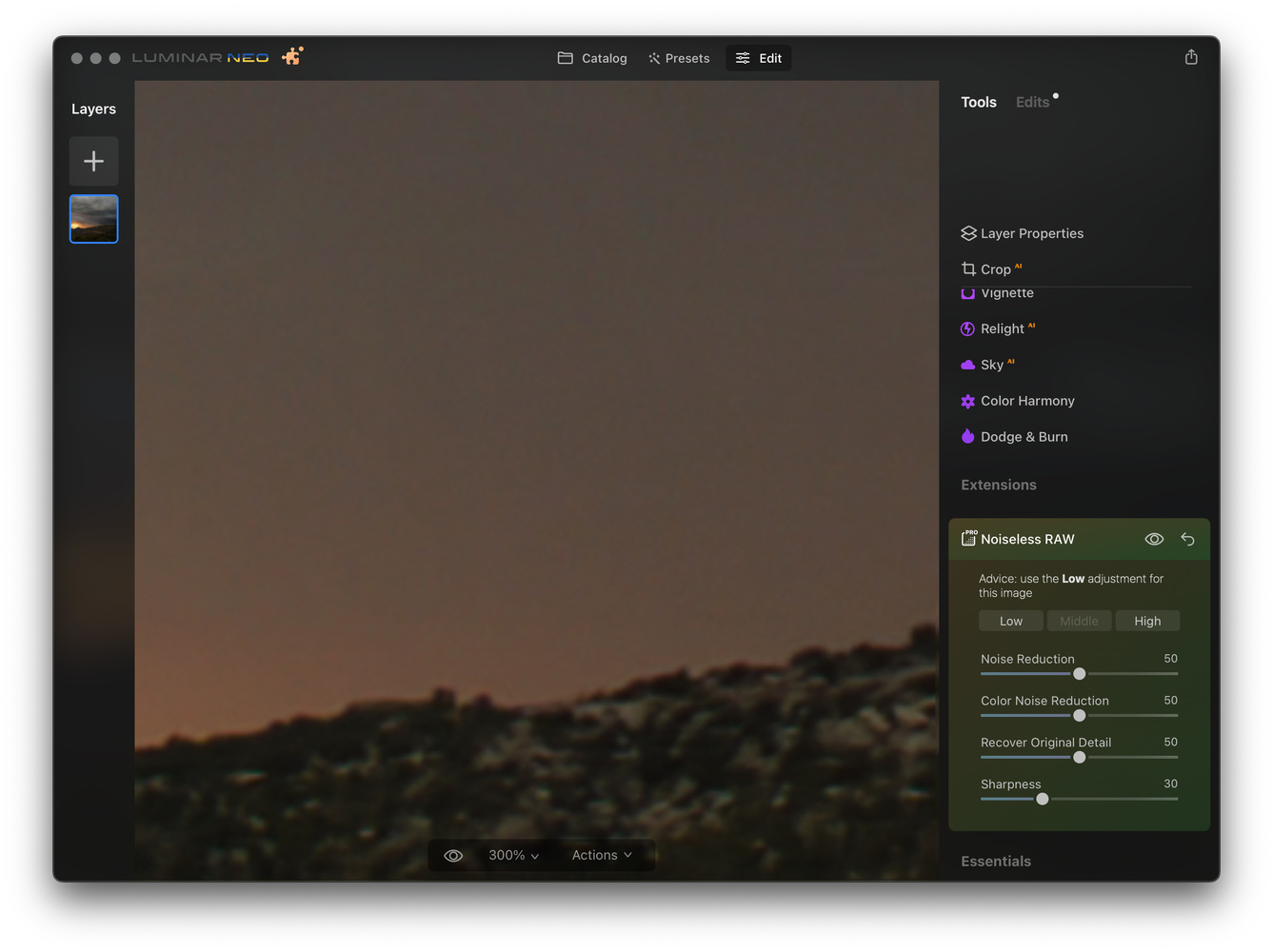 Eve, with my reduced size and compressed JPEG, you can see things have been cleaned up nicely. I felt the ground lose some sharpness and saw very little improvement when pushing the detail and sharpness sliders. I took the same file in Topaz DeNoise AI and here is the result: 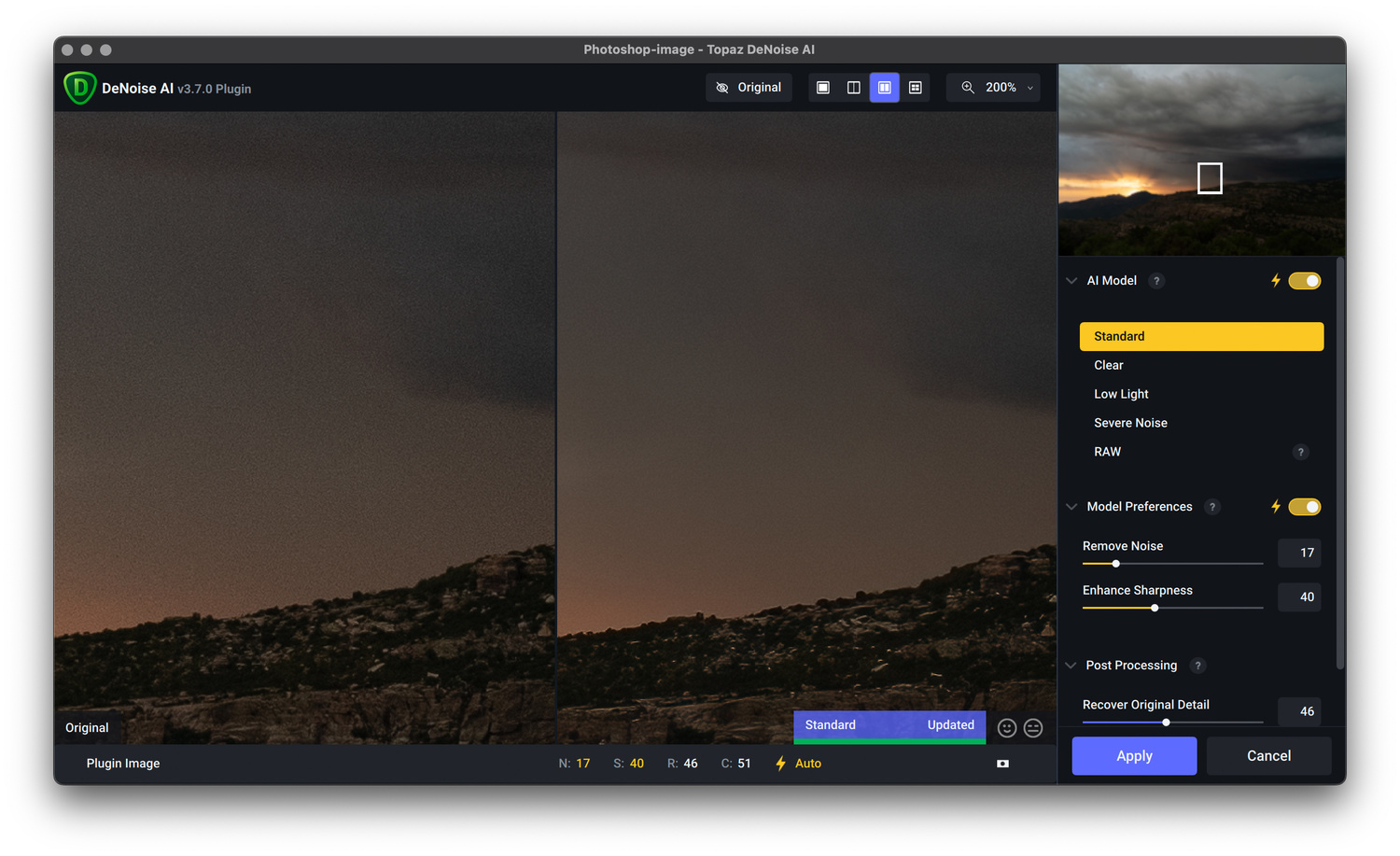 This has also been cleaned up nicely (you see it at 200% magnification, but it’s been scaled down to fit our format). Topaz has an automatic mode, and that’s what I used. He chose noise reduction settings. I thought Topaz did its job a bit better at preserving detail, but the two programs were pretty close. I preferred the Topaz split screen offered for comparison, but Luminar Neo offers an icon that lets you switch between the original and the noise-reduced image. The Topaz plug-in is native to Apple Silicon and very fast. We will have to wait a few days to see how the Neo expansion behaves in the same environment.

If you’re a happy Topaz user or are happy with another noise canceling package, I don’t see much reason to switch. There’s an advantage to working in Luminar Neo for everything if that’s what your workflow looks like.

For my editing, I usually start in Lightroom or Camera Raw, (often earlier with DXO PureRaw 2), then Photoshop, and Topaz noise reduction and sharpening plug-ins, then Neo for finishing. But your workflow may be very different.

Noiseless AI will be a nice addition for photographers looking for pro-level noise reduction. There are already tools in Neo for noise reduction, but this new noiseless AI is superior in fast side-by-side tests. It’s a bit like noise reduction in Lightroom and Photoshop. They’re both pretty good, but some third parties do better if you’re a photographer at a level where that matters to you.

Current Neo users will be able to get their expansion at a discount, or you can opt for all new expansions at a discount, but you’re buying future expansions on sight without knowing if they’ll be useful to you. However, Skylum just let me know that two new expansions, coming this year, will be Upscale AI, an AI-powered tool to improve image resolution in a natural way, and AI Background Removal, an AI-powered tool. ‘AI that automatically removes the background. behind any subject.

Increasingly, Luminar Neo is evolving (or transforming) into a subscription package, which will frustrate many first-time buyers, as Skylum originally looked like an alternative to the world of Adobe subscriptions. But businesses have to survive in a tough world. I think Skylum owes its customers their thoughts on their current direction and why the apparent shift in philosophy.

My look at this latest noise reduction tool was cursory as I only had a few days to test it. Also, this is not the final version, and experience tells me that there will be changes before the final version is released at the end of the month. It’ll probably go faster, and I haven’t seen the Apple Silicon version, which is likely to have better performance.

Still, it’s obviously a worthwhile tool, and it seems to remove noise as well as some of the best tools out there. This is worth considering if you are a Luminar Neo user. Skylum has a bewildering array of purchase options, and you’ll have to sort through them to see what works best for you. Sales are frequent and prices change frequently.