With Luminar Neo, you have the ability to remove power lines and dust spots from sensors with just one click. It has never been so easy, and most importantly, it takes a lot of work out of you. But is it faster than doing it manually? Or does the automatic process ultimately take longer?

You have to give it to them, Skylum offers many features to edit your photos easily. This is what made Luminar 4, Luminar AI and now Luminar Neo so popular. With Luminar Neo, developers have added the ability to automatically remove power lines and dust spots from sensors. The last option is welcome.

You can’t take pictures without risking getting dust spots on the sensor. It seems that some cameras are more sensitive to it than others, and I remember my old and trusty Canon EOS 1D X having a lot of trouble with it. Sensor dust spots become visible when using a small aperture, which is often done in landscape photography.

Many have wondered why software developers never added automatic dust spot removal to their software. Sounds easy enough, and Luminar Neo is the first I know of that offers this feature. With the push of a button, the software recognizes dust spots on the sensor and automatically removes them without the tedious task of looking at each area of ​​the frame at 100% magnification.

I took an old photo of Rørvik beach in Lofoten. It has a lot of sensor dust spots, and I remember it took ages to remove them in Lightroom. So I loaded the photo into Luminar Neo and tried the automatic sensor dust spot removal tool. To make the sensor dust spots much more visible, I added a quick and dirty treatment that would exaggerate them

By the way, since I installed a Dutch version of Luminar Neo, the interface is in Dutch. But I think it’s not really a problem to understand the screenshots.

What I found out is how well this stain removal works. Most of the dust spots from the sensor are gone. There are still a few, which means you still have to sift through the image to find any that aren’t completely removed or just aren’t seen by the software.

The work of cloning and removing the majority of sensor spots is done automatically, which saves me a lot of work. Be careful, though, as it won’t work very well in a night sky and it can mistake objects for a speck of sensor dust.

The other option is automatic removal of power lines. If your image contains power lines that you don’t want, Luminar Neo can recognize and remove them for you. It can also save you a lot of time because you don’t have to do it manually. According to the advertisement, it works at the touch of a button, even in images with a lot of detail. Let’s take a look at some raw unedited files to see how effective Luminar Neo is.

The first example is the famous Erasmus bridge in the city of Rotterdam, the Netherlands. It has a lot of cables that aren’t power lines, but Luminar Neo doesn’t know that. The result is a bit surprising. I would expect a more consistent result, not nearly random deletion. 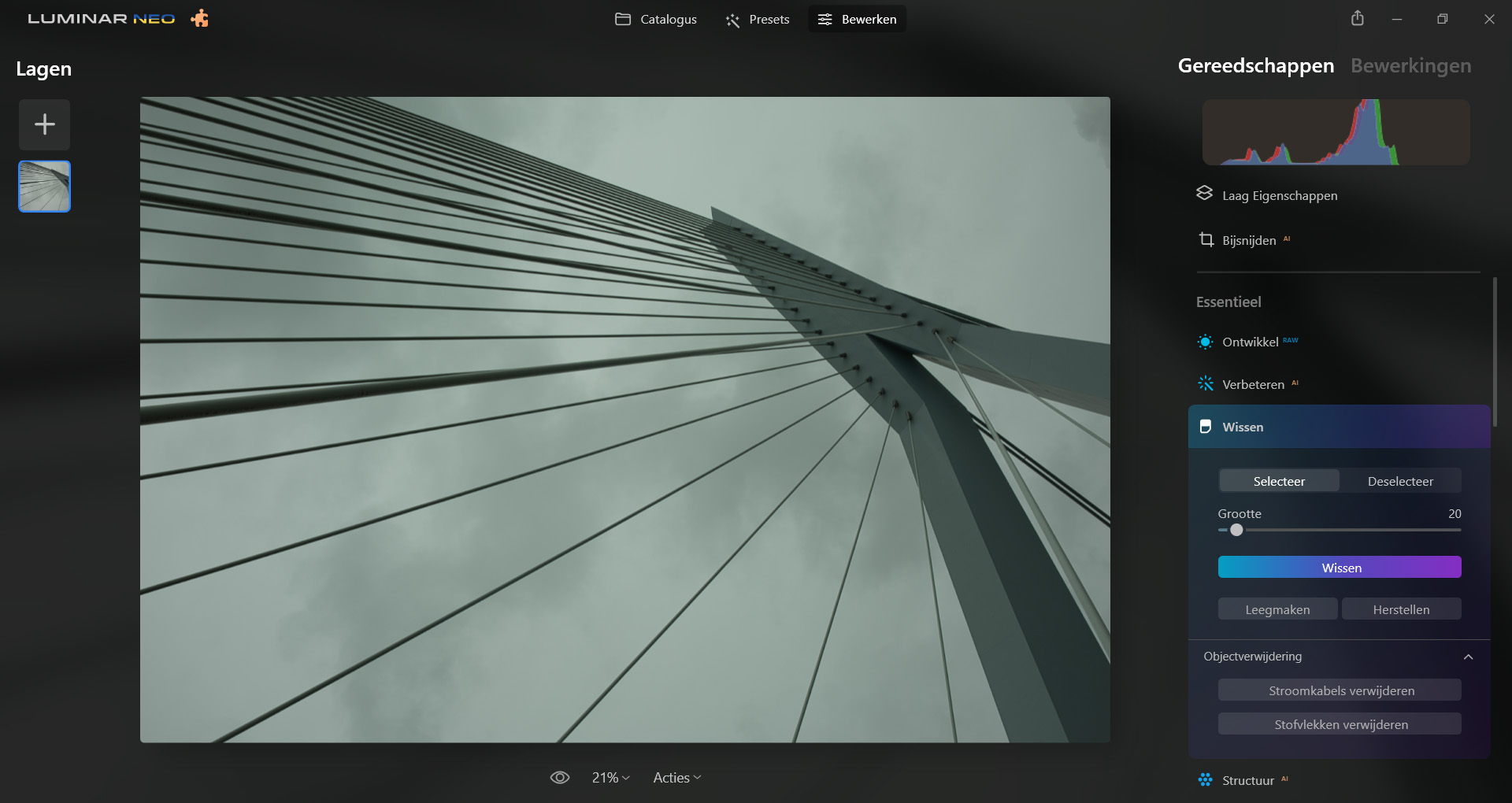 Of course, this example is a bit silly. S, o I took some pictures with obvious power lines in the frame. The first is that of the Hamnøy rorbuer, a well-known spot for many photographers. It has a few power lines that I would like to remove. 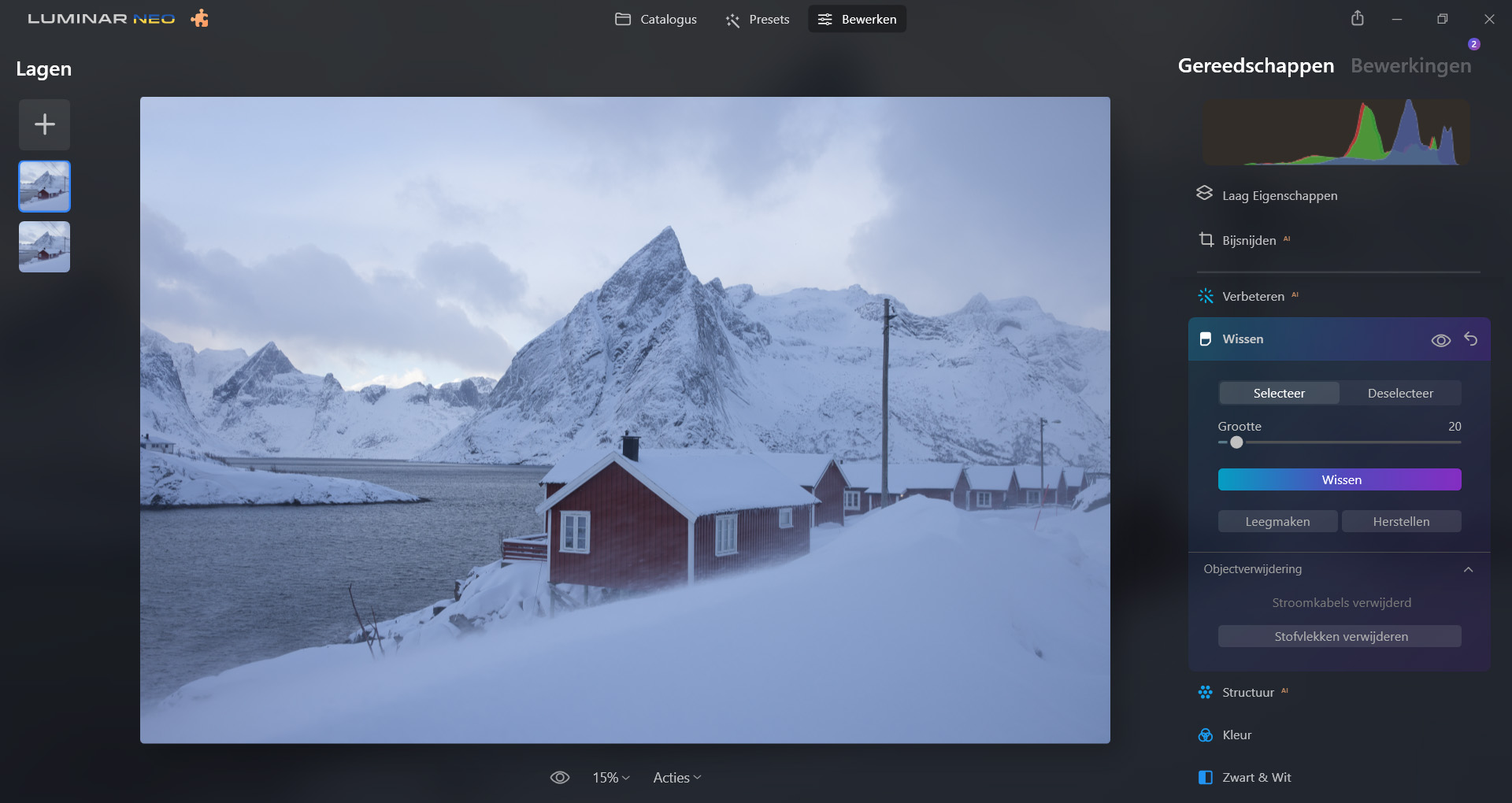 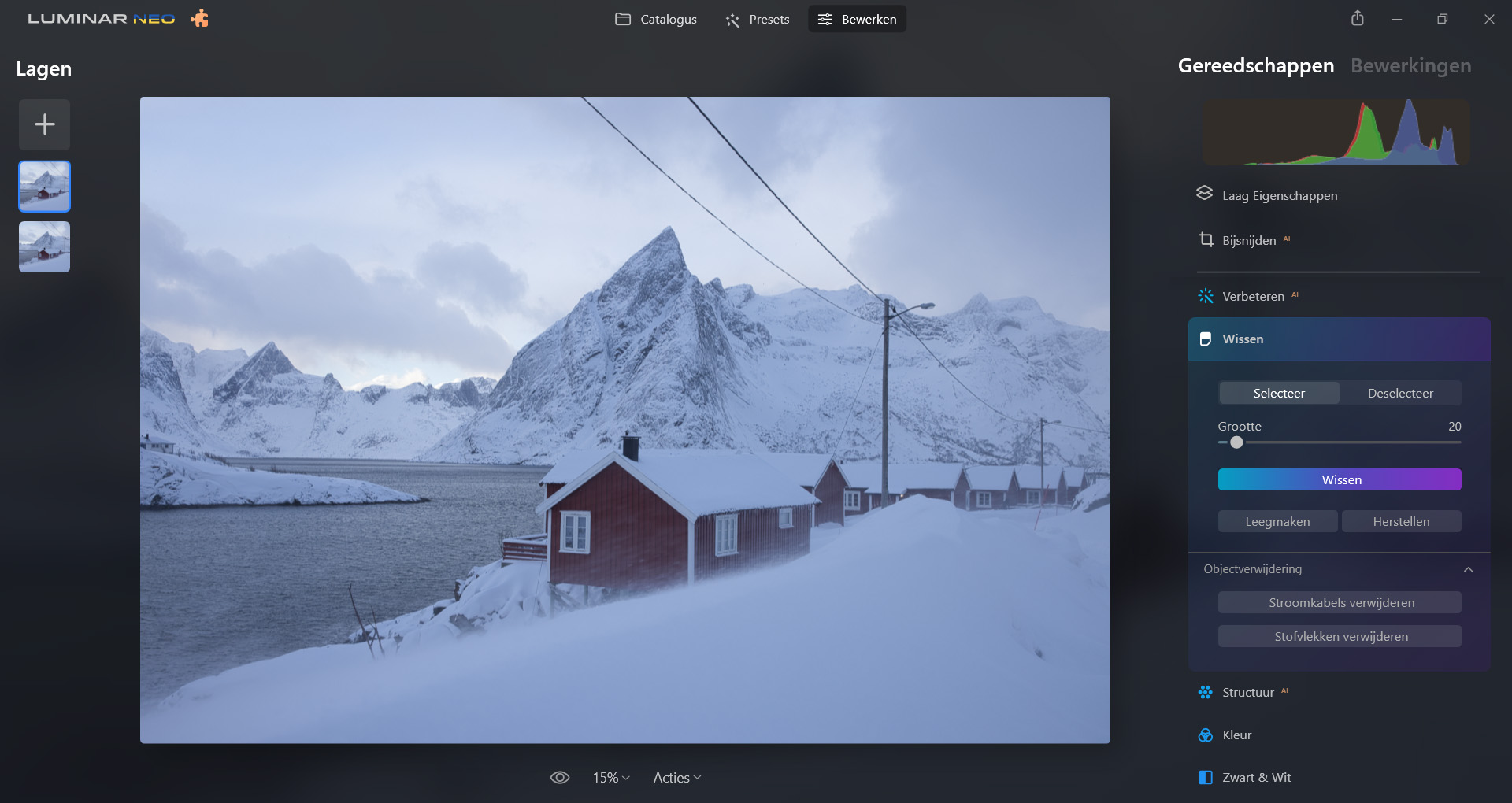 Luminar Neo does a good job. The result is superb at first glance, and all it takes is the press of a button. But if you look closely, you see the errors made by the software. He’s not smart enough to figure out how the lines run through and through, leaving traces after they’re removed. It also removes the bulb from the post entirely, which is weird. See two details of the result in the examples below. 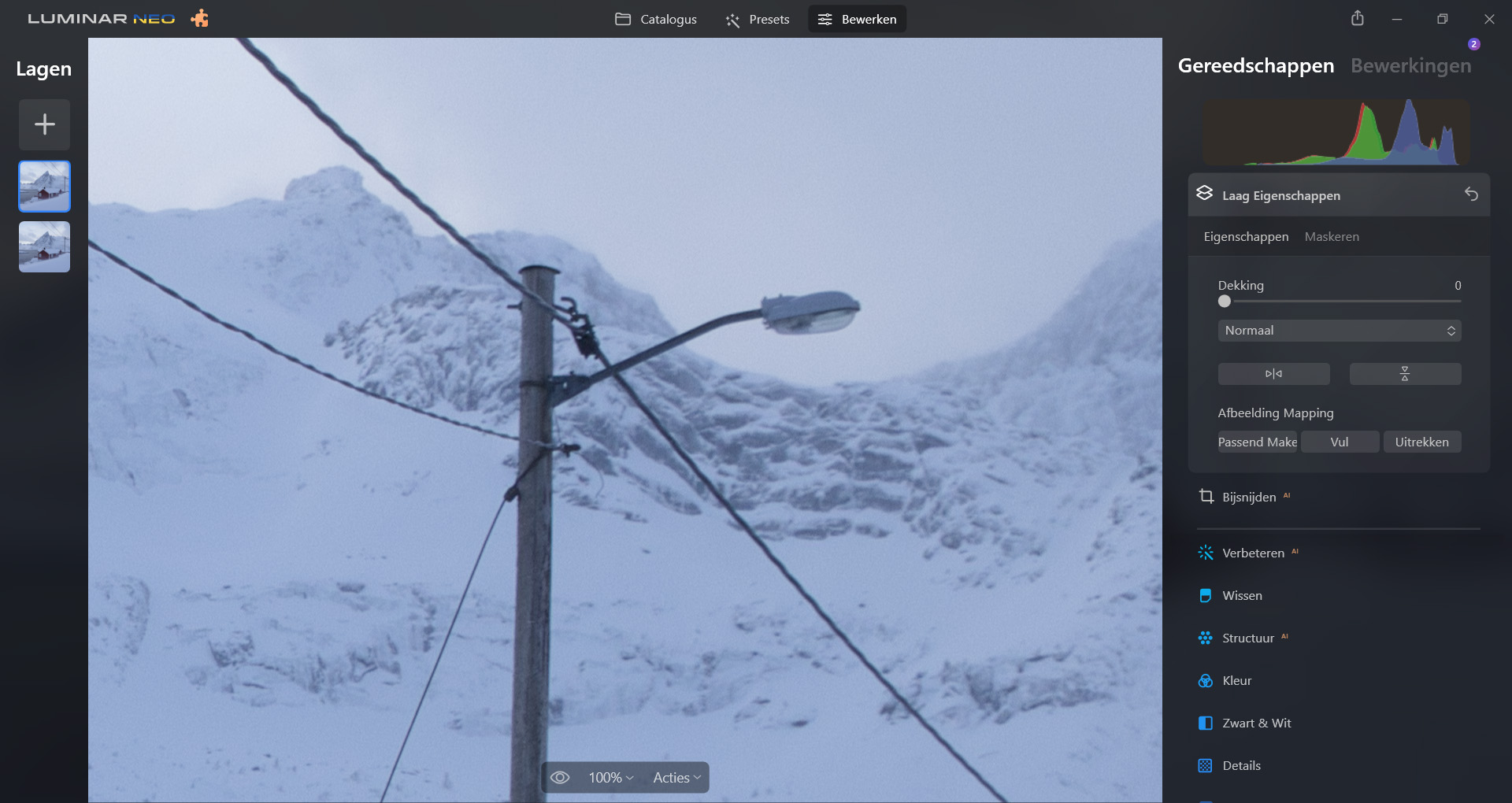 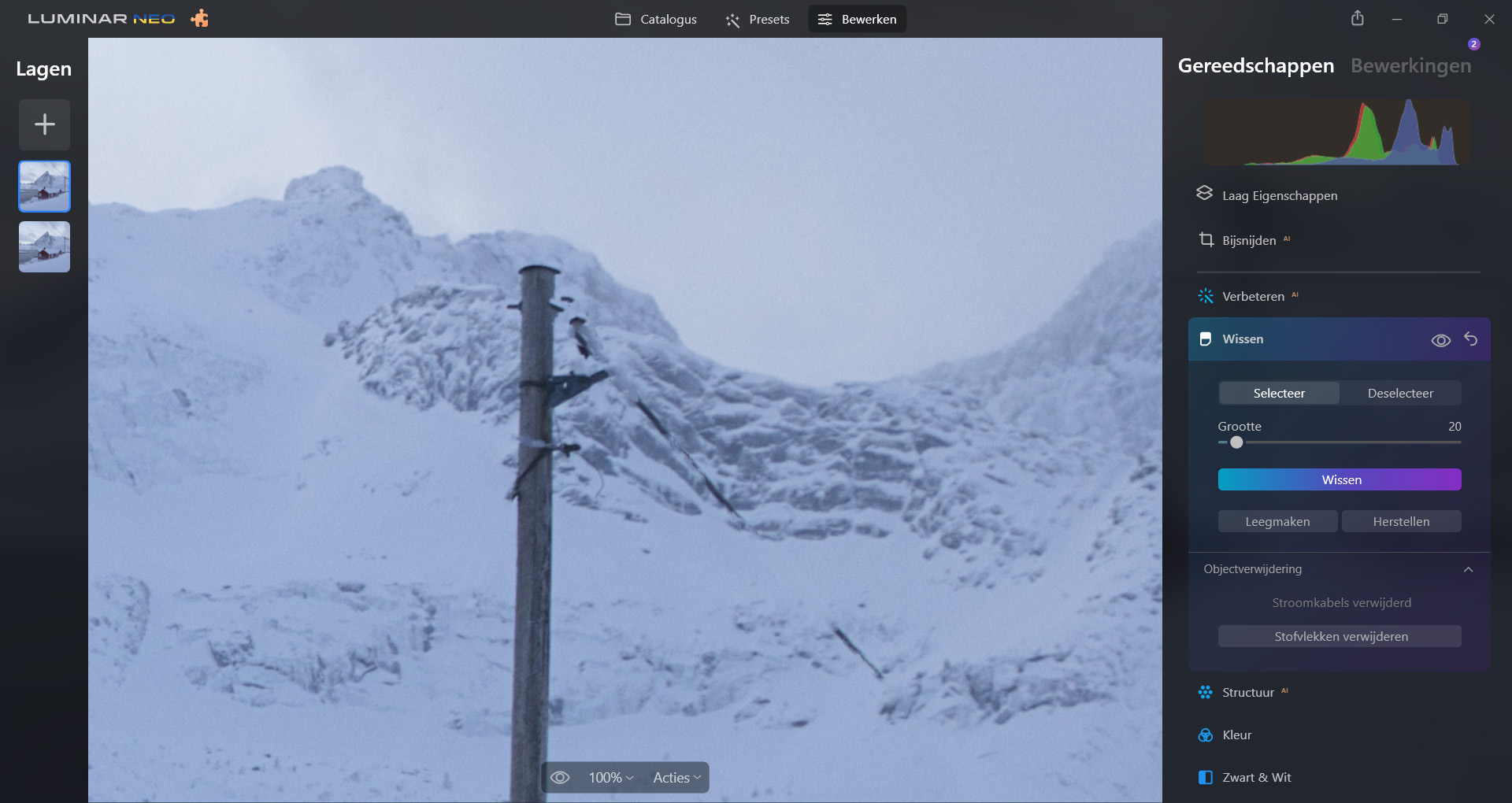 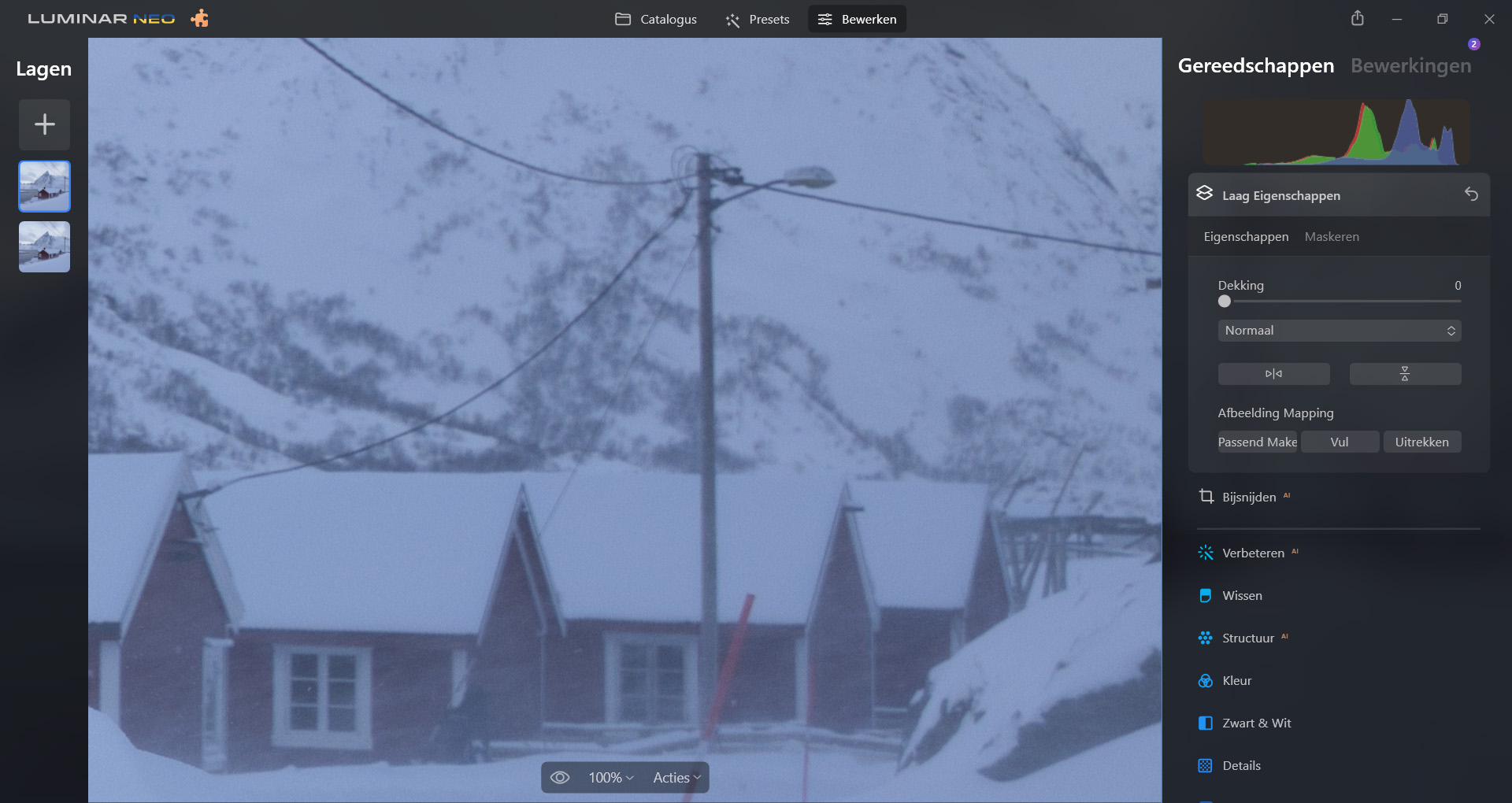 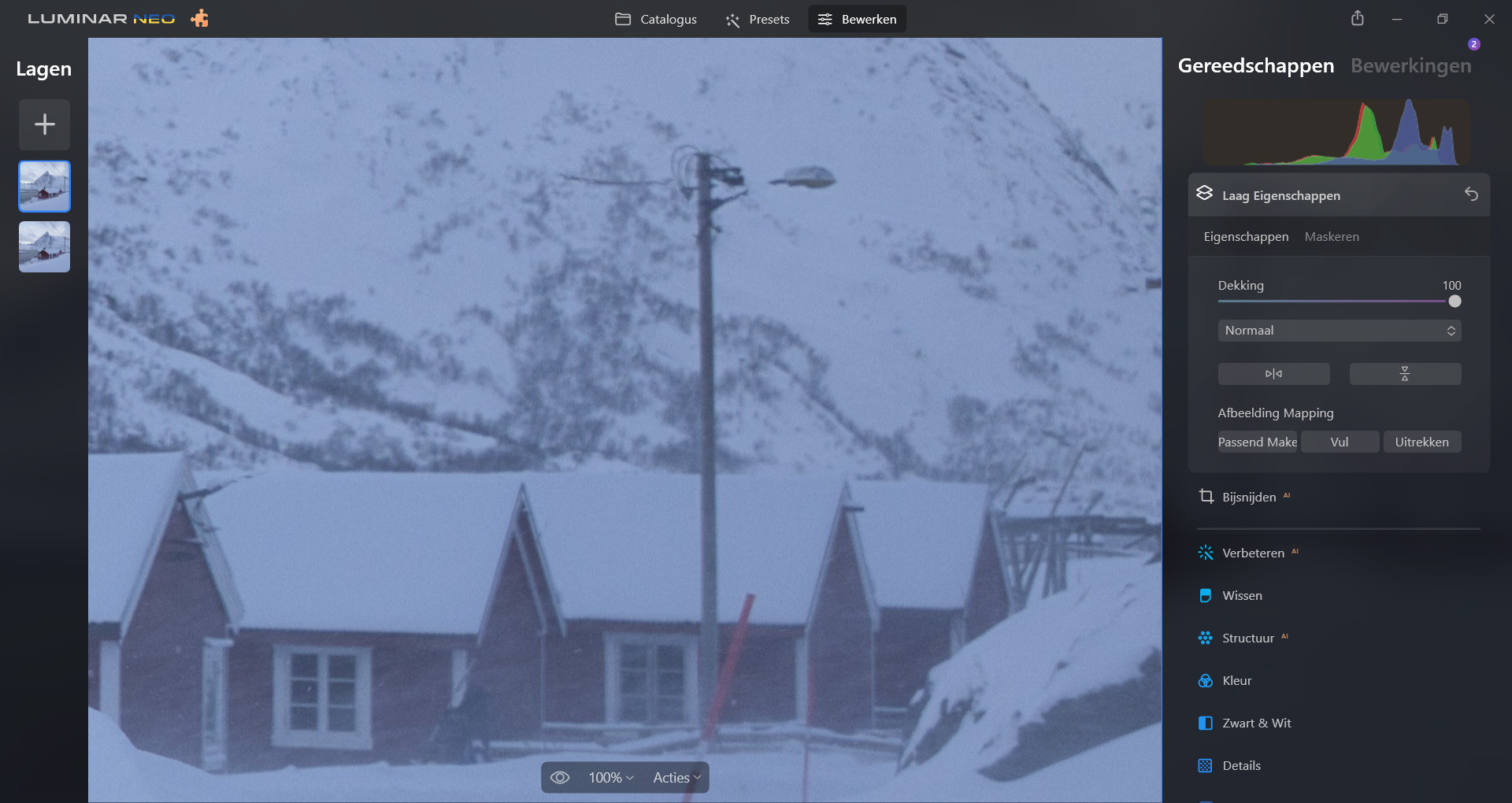 I took another image with power lines almost completely clear of their surroundings. I guess it’s an easy task for this automatic power line removal tool. Again, at first glance it looks good. 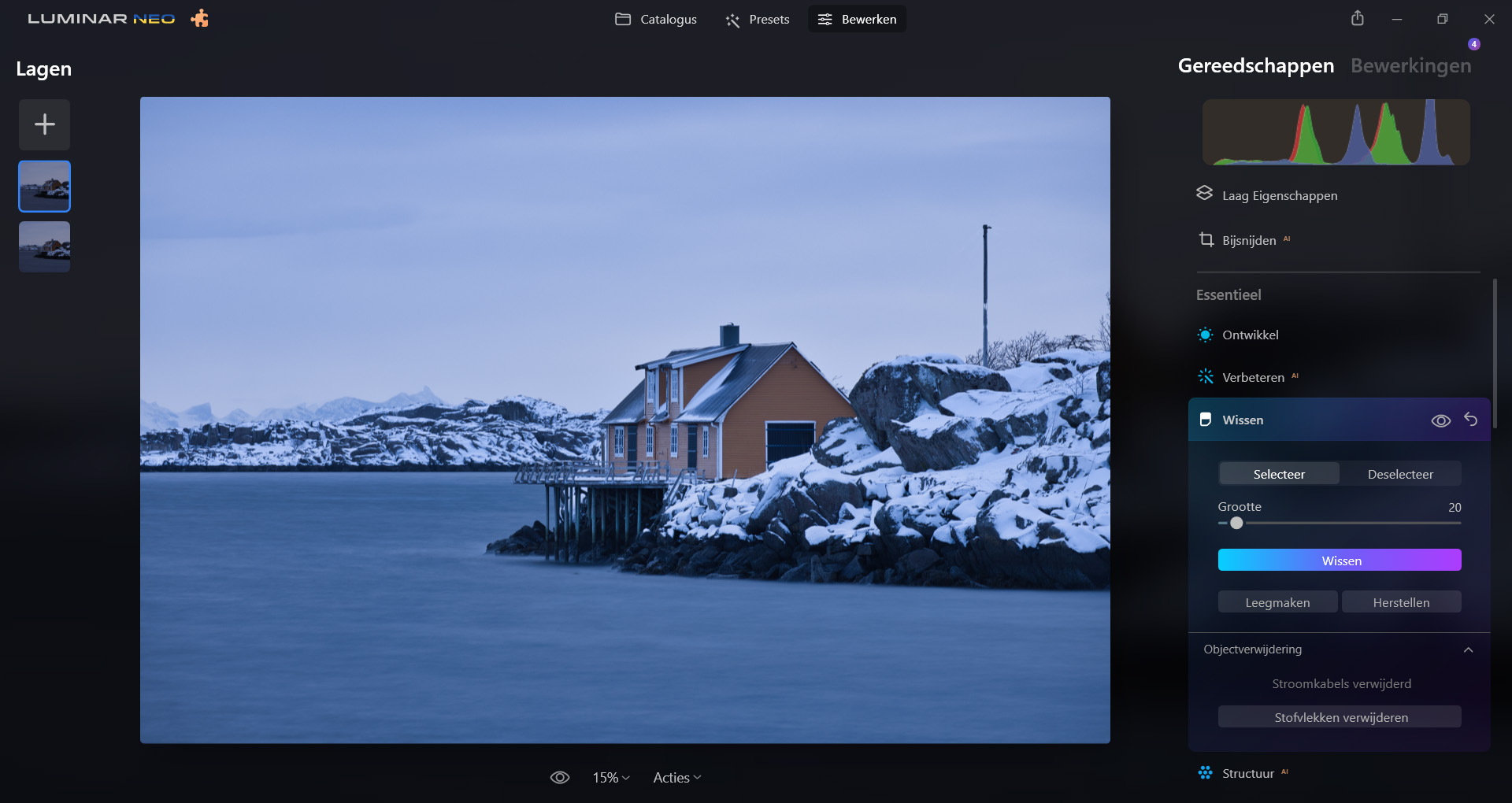 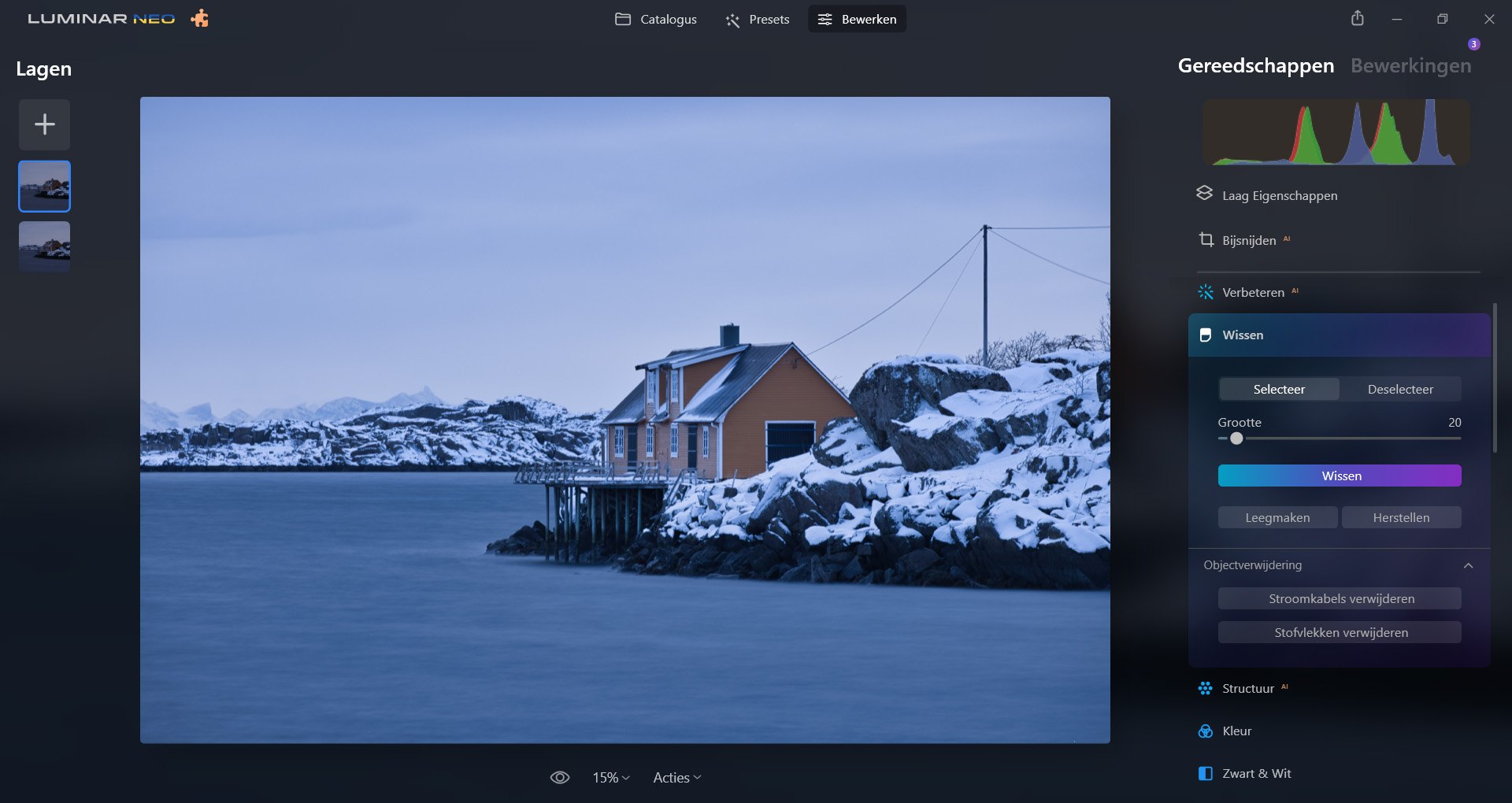 But take a closer look at the details. The tool also removed parts of the pole and some trim from the roof of the fisherman’s house. 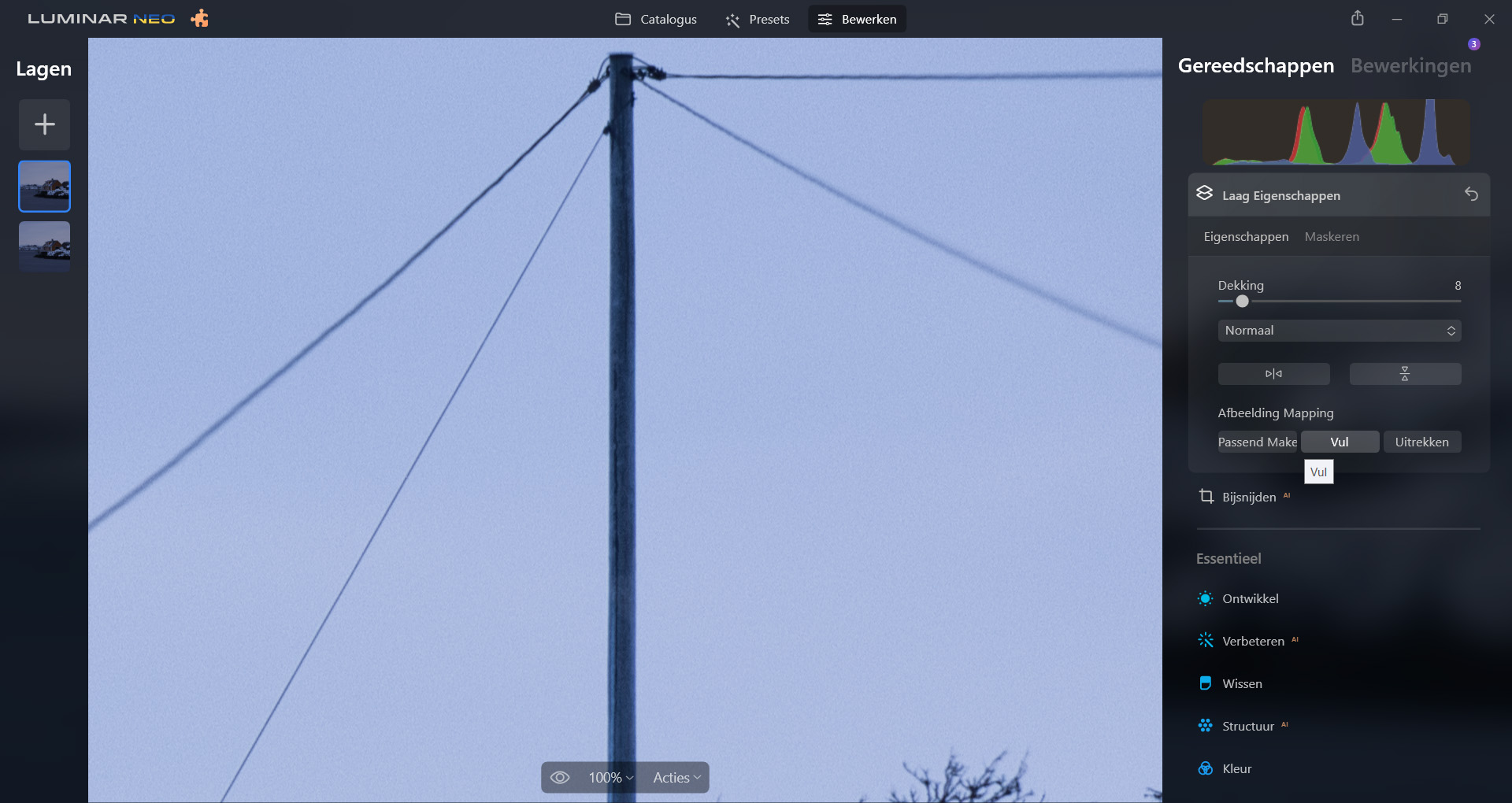 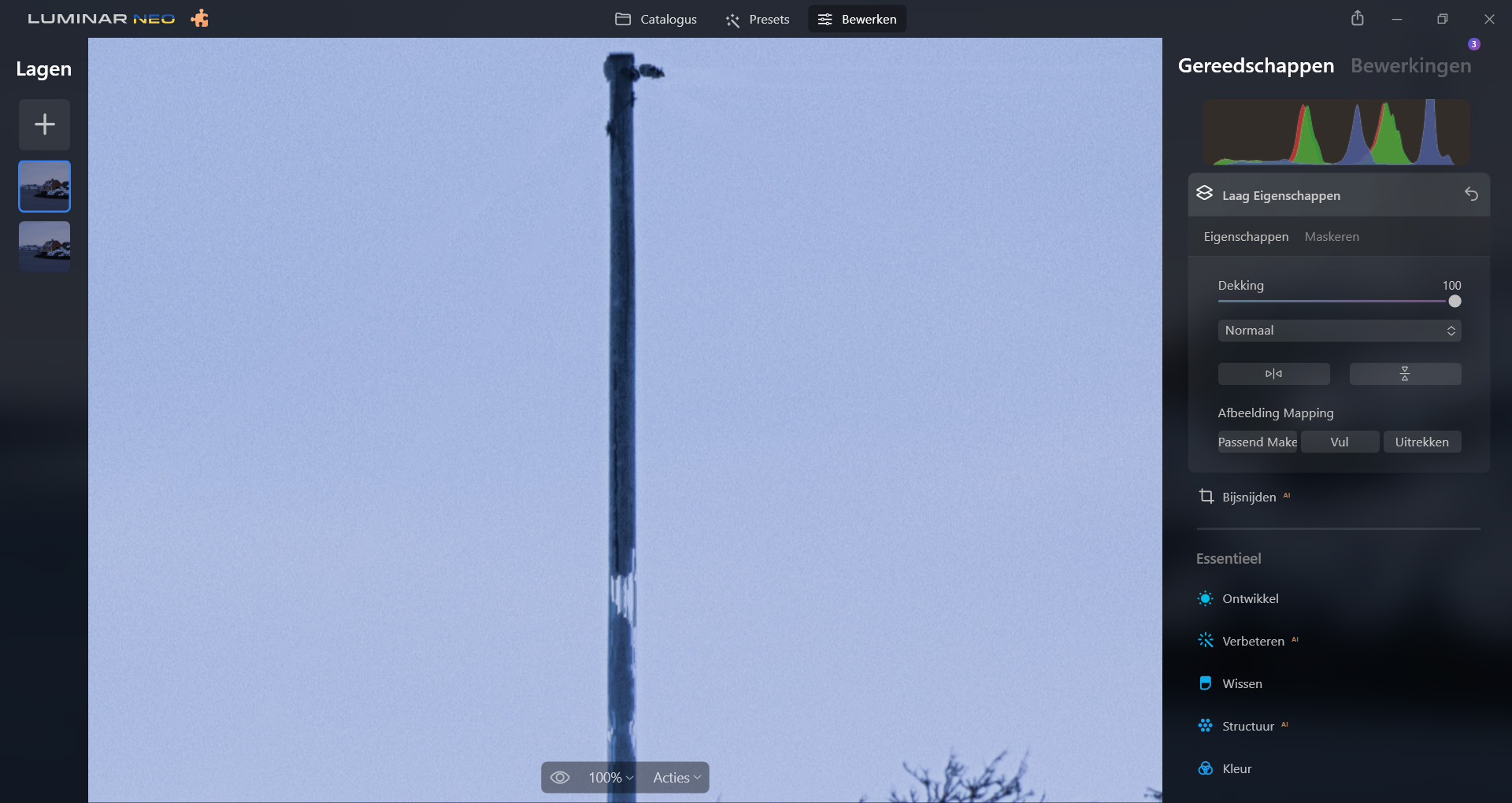 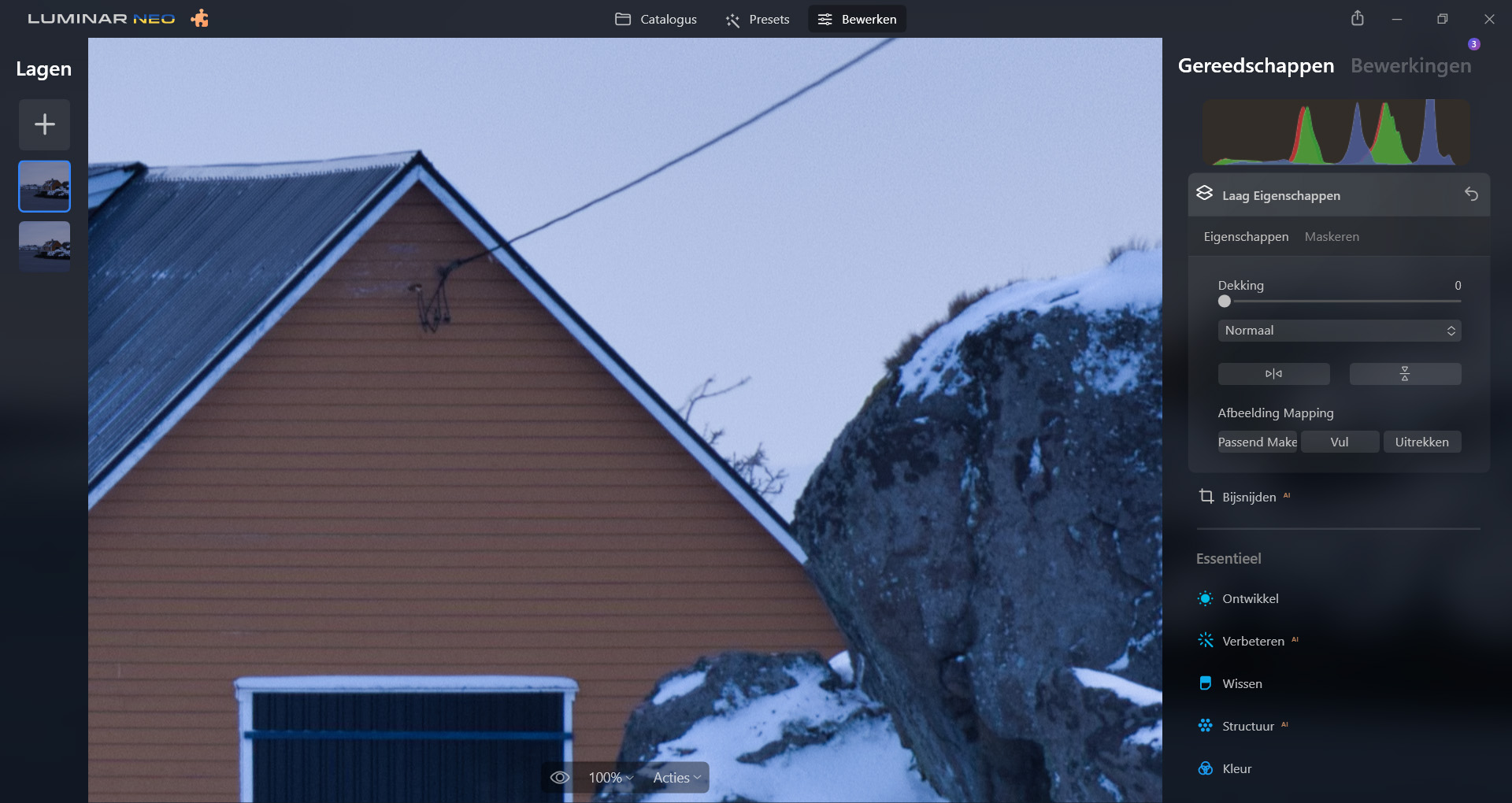 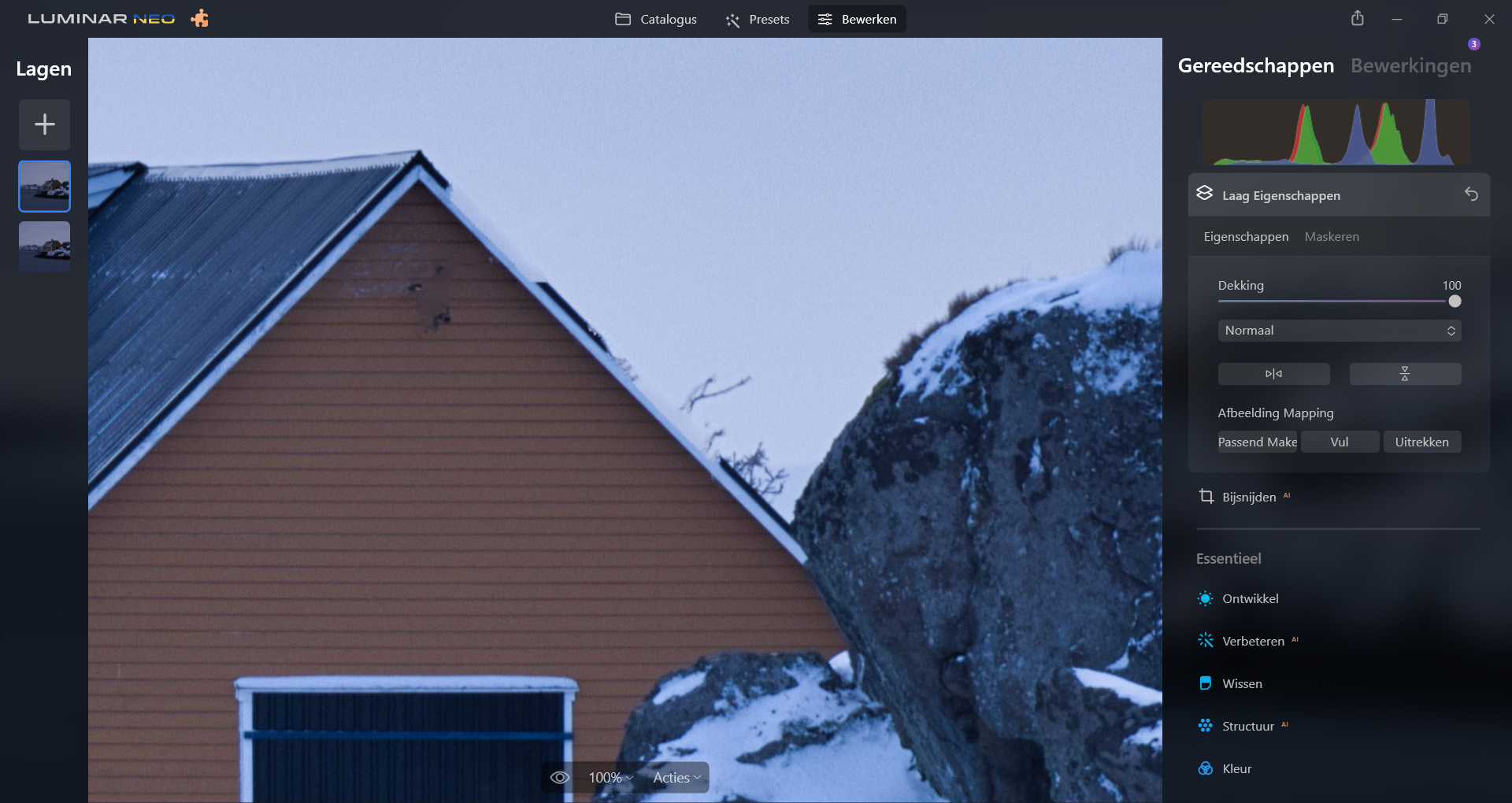 Fast withdrawal and a lot of extra work

Automatic power line removal is a handy tool, but not without flaws. This means that you still have to do a lot of extra work to get an acceptable end result. Luckily, Luminar Neo has added the ability to use a rudimentary layer option, which offers just enough to fix errors made by the powerline removal tool. But finding the errors and fixing them will take a lot of time and effort.

Before you start using the delete tool, create a new layer of the original by copying it. Run the removal tool on the top layer. With the masking option, you can search, find and fix defects. You can either hide the full image and brush the power lines yourself by choosing the paint option, or use the erase option by hiding the problem areas. Choose what you find convenient.

The automatic power line removal tool can and will also remove tree branches and perhaps other things you wouldn’t expect. In other words, you will have to search the whole framework to find all the errors, which can take some time.

While the automatic sensor and powerline dust spot removal options in Luminar Neo seem to be nice, you might end up spending a lot of time correcting mistakes. Simply put, you cannot blindly trust these automatic options. Depending on your image, it’s debatable whether these options will really save editing time. In particular, power lines are probably more easily and quickly removed manually, although I wonder if Luminar Neo will be the best choice for such a task.

What do you think? Please share your thoughts in the comments below.