Being a well-rounded photographer who can succeed in any situation is the ultimate goal of most photographers. However, what happens when you are forced to take a portrait by lighting from below? Today, I take up the challenge.

Most photographers enjoy the convenience of using their most tried and true lighting techniques. Whether it’s lighting from 45 degrees with a large softbox, or using two octaboxes above and below for that classic butterfly lighting, or maybe just using a single light reflected in the ceiling, it is very easy to find a style of lighting that works most of the time. time and just stick to it over and over again.

But what happens when you’re forced to light a subject in a way you’ve never tried before? Would you like to collapse or would you be up to it? That’s the question I asked myself when I dreamed up the concept for a new series of photo challenges that I hope to feature often on the Fstoppers YouTube channel. What kind of results can a photographer achieve with someone else setting the location of the main light?

In the video above, I told Lee to set up a photoshoot challenge, and in good faith, I’d be the guinea pig of my own creation. With a bit of cheating, I ended up choosing the dreaded “up-lighting” setup. This lighting setup, where the main light is placed below your subject’s face, is often referred to as “Horror Movie” lighting because so many villains and antagonists are lit this way to make it look much more sinister. Other than using lighting as fill light for portraits and dramatic beauty portraits, I’ve actually never seriously considered lighting technique in my own work. Needless to say, this challenge wasn’t going to be easy, and that wasn’t even taking into account my model’s crazy manscaping and wild wardrobe choice.

If you want to replicate the final image I took, and I hope it was good enough to inspire some creativity for your own use, I’ll describe the three-light setup below. Of course, watching the video above should answer all your questions and give you a better idea of ​​where everything was placed. With this three-light setup, all flashes were Profoto B10 or B10x strobes set to exactly the same power. The camera was a Nikon D850 and a Tamron 24-70mm lens set to f/2.8 for shallow depth of field aesthetics.

The luminous key: The whole challenge is based around the main light illuminating our subject. For this shoot, I used a new Profoto OCF 2′ foldable beauty dish that we recently purchased for the studio. I love traditional beauty dishes, but traveling with one all the way to Puerto Rico where I now live is pretty cumbersome, so I left it at the Charleston studio.

While beauty bowls are known for their soft, even lighting, I thought it might be worth using the light modifier without the soft diffuser (sometimes called a sock). If you look at the photo of the beauty bowl above, if tilted specifically, you can get the unique effects of harsh light leaking from the opaque reflector mixed with some of the soft fill light bouncing around the edges whites of the dish. By tilting the dish towards the camera, I was able to add some contrast to my subject’s face while preventing light from spilling onto the lower part of her outfit. I’ve definitely used a beauty dish this way in the past, but never from below and never from an angle quite like what I’m describing.

Edge light: Once I felt that my subject’s face was lit well enough and that the “uplight challenge” requirements were met, I decided to help separate Charlie from the backdrop. To help separate his hat and shoulders from the dark background, I used a Profoto OCF 1’x3′ stripbox placed up and behind him. With this light directed towards her shoulders, I was able to add a nice theatrical highlight around her whole body that made her image look more three-dimensional. This edge light or rim light look is something I like to do when I want to create a more exaggerated image that is more in line with an action, movie or video game vibe. 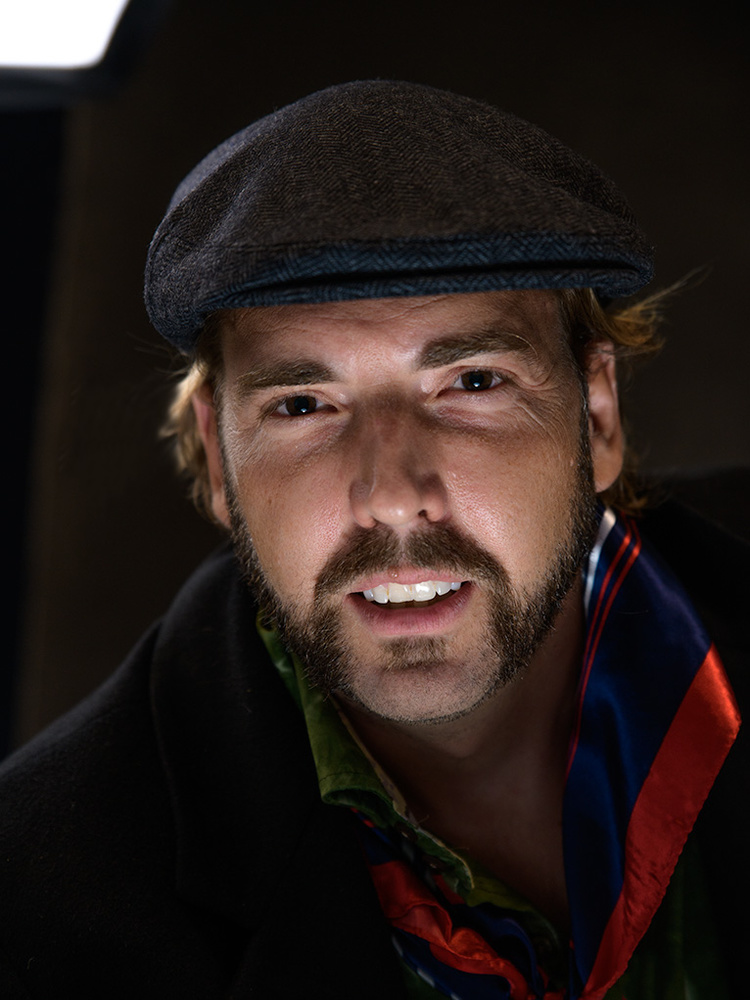 Background light: The final light I decided to use was a soft fill light on my Gravity Backdrop just to pull out some of the texture and give the area behind my subject a different tone. I could have used any type of light modifier or even a bare bulb flash but to really cut it I went with a Profoto RFi 3′ Octabox mainly because I had recently built this softbox for another shoot featured on our YouTube channel. 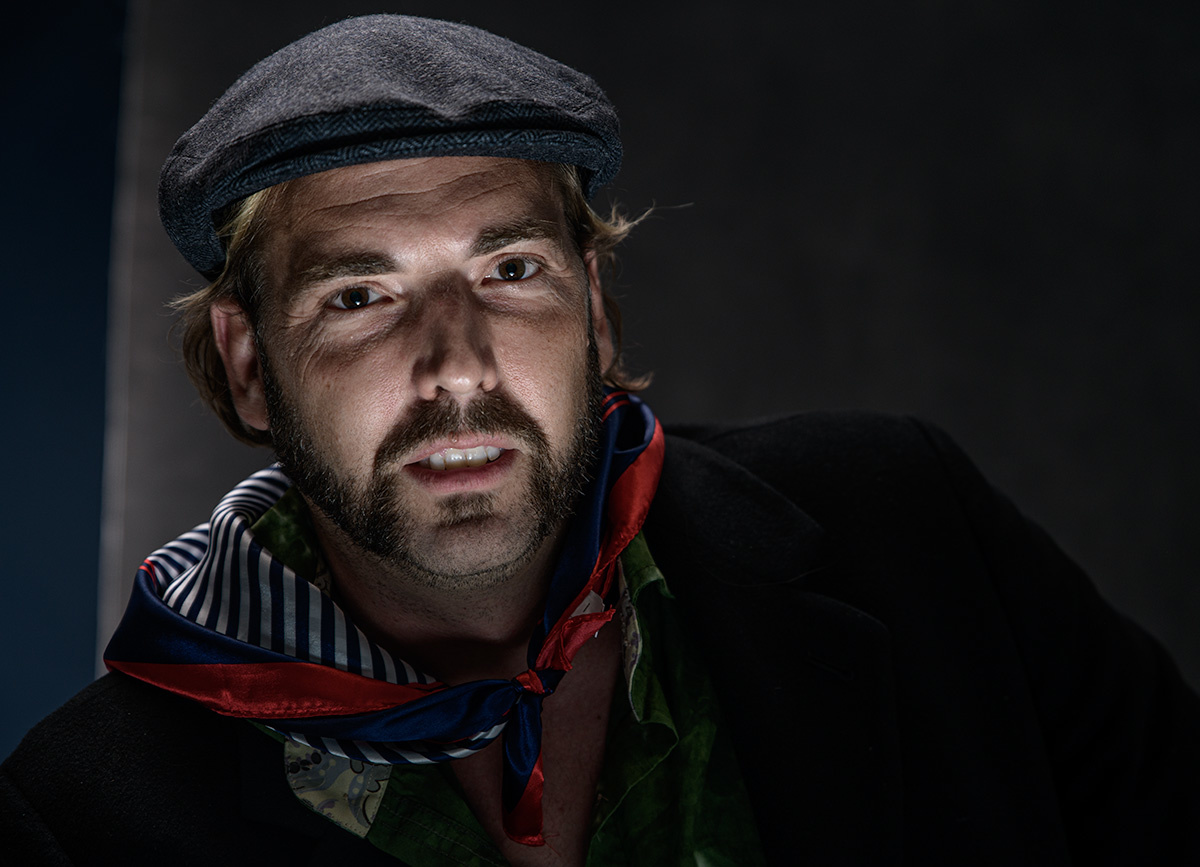 Below I have posted the final before and after image of my submission. Usually when shooting any YouTube content and especially a challenge video, I’m always aware that the final shot you take isn’t always your best work. In this case, with something as difficult as lighting up a crazed pirate/ship captain named Charlie, I wasn’t just hoping for a decent picture, but completely avoiding utter embarrassment. However, I’m actually quite proud of the final image. Going through this process definitely made me question my lack of light in my work. 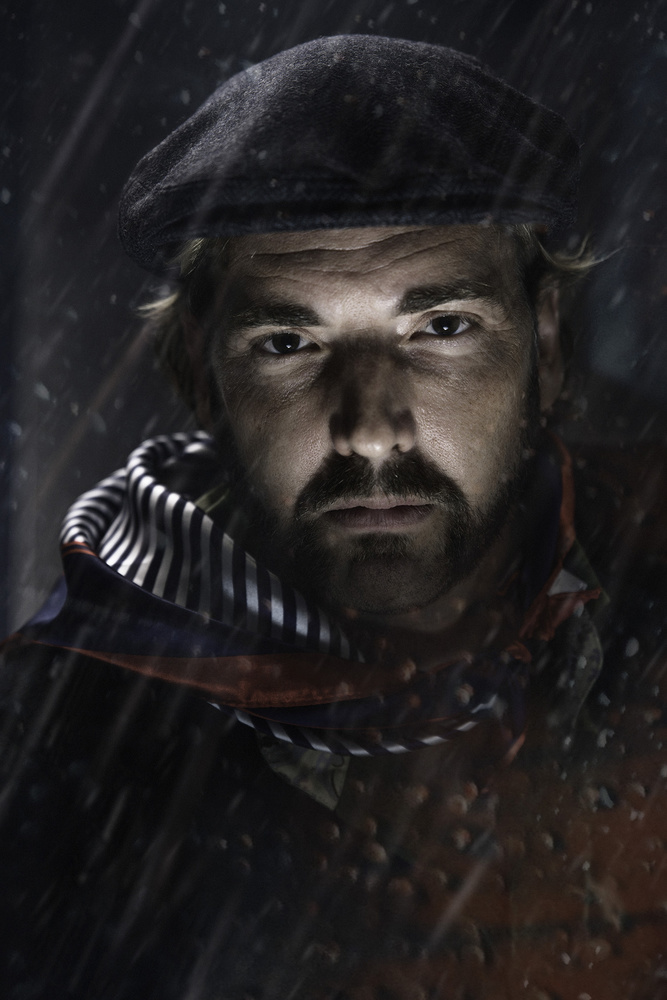 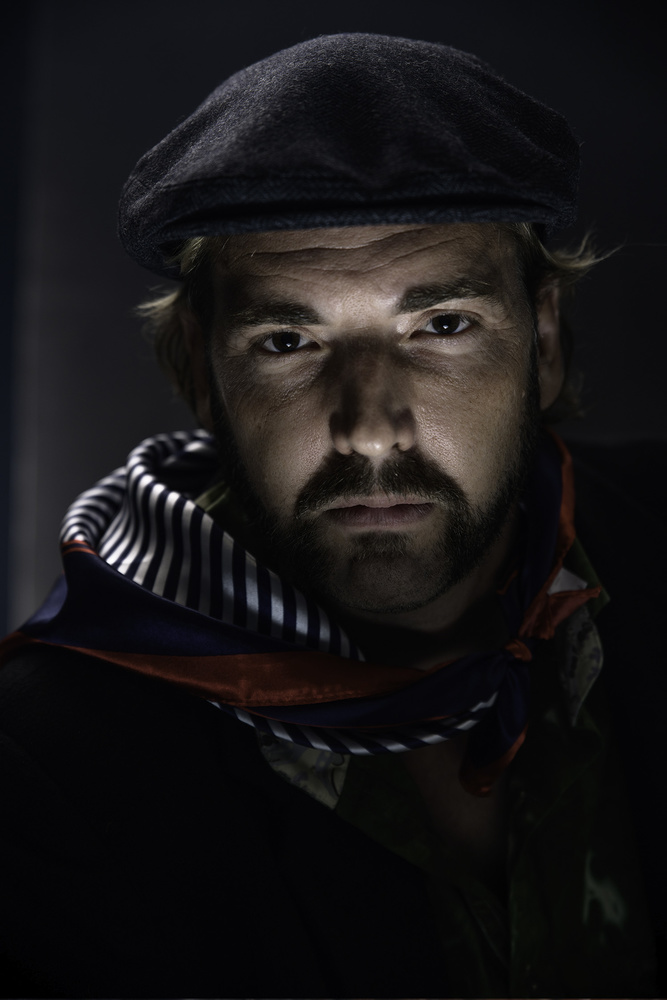 As you can see in the before and after image, I really didn’t make a ton of adjustments to the image directly from the camera. In Lightroom I desaturated the image a bit and tweaked the overall contrast slightly, but most of the work was done on set planning my lighting and taking the time to confirm everything was fine before deleting 20 to 30 frames. Once the image was captured and I opened it on my computer, I decided to add some layers or blurry rain and some blurry overlays just to give it a bit more mystery, cohesion and a finished look .

With this first challenge behind me, I’m excited to pass it on to all of you. Next time you have someone in front of your camera, take a moment out of your shot to attempt a shot using uplighting and see if you can create something that might actually be worthy of a portfolio. You can post your best picture below in the comments, and we can all share our experiences.