If there was one word to describe camera sales trends in 2022 so far, it would be “pivot”. When I say essential, I mean it looks like a switch has been flipped and the market has flipped.

Earlier this year, I reported on how transformative 2021 has been for manufacturers, as production resumed, demand increased, and component shortages wreaked havoc on delivery. It was the year the mirrorless took center stage, the DSLR continued to decline, albeit more slowly, and the built-in camera became almost a thing for the history books.

Looking back to 2021, it’s important to recognize how critical this year has been for manufacturers, and to do that, we need to put it in the context of the past six years.

In 2016, the implosion of camera shipments (and revenue) continued unabated, hitting a new low of 25 million units. However, within this overly pessimistic view of the industry was the cherished story of the mirrorless camera, released by Olympus and Panasonic in 2008, then taken up with vigor by Sony. 2017 was a watershed moment (see deliveries below) when built-in mirrorless cameras were matched in value, and then DSLRs the following year. The penny eventually dropped for Nikon and Canon and they rushed to market with new systems in late 2018.

The next few years were to be exciting times as these new systems were populated…then COVID arrived, essentially shutting down the market for two years. In 2021, manufacturers had the opportunity to get back on track and really implement their medium-term development strategies, which is what we are seeing now in 2022. 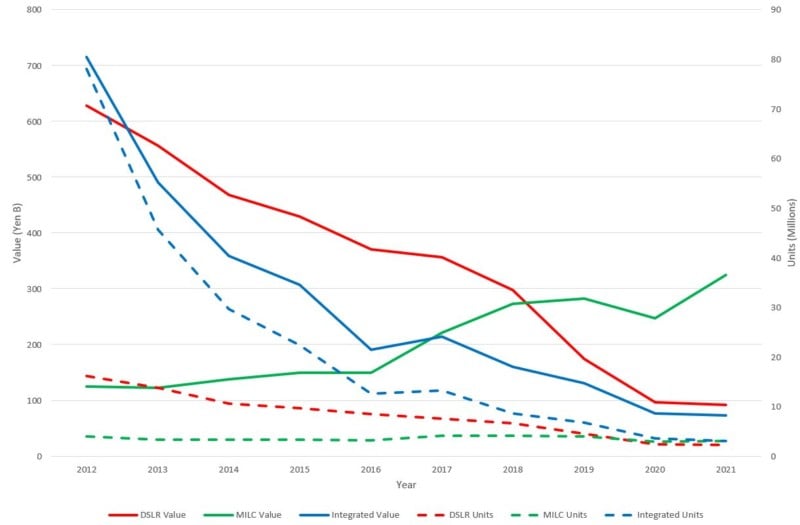 So what’s the headline news? The graph below shows cumulative unit shipments since 2017. Back then, a total of 25 million units shipped, which has since imploded to a barely believable 8.4 million last year.

Keep in mind that the peak of the market was 2010 when 121 million cameras were produced. Looking at this, it seems likely that shipments will be lower than last year and likely to be below 8 million. The 2020 numbers show the impact of COVID, with shipments nearly halving, but 2021 just kept that low.

At first glance, 2022 does not look any better, at a time when we can expect a “rebound” effect. Economies have opened up and there has been excess liquidity in the economy, which has led to an increase in demand. The problem for manufacturers is that the capacity to meet demand just isn’t there, due to the significant slowdown in manufacturing. This situation has been compounded by shortages in the component supply chain and, more broadly, by the specter of impending stagflation: rising prices due to rapid inflation and a stagnating economy. 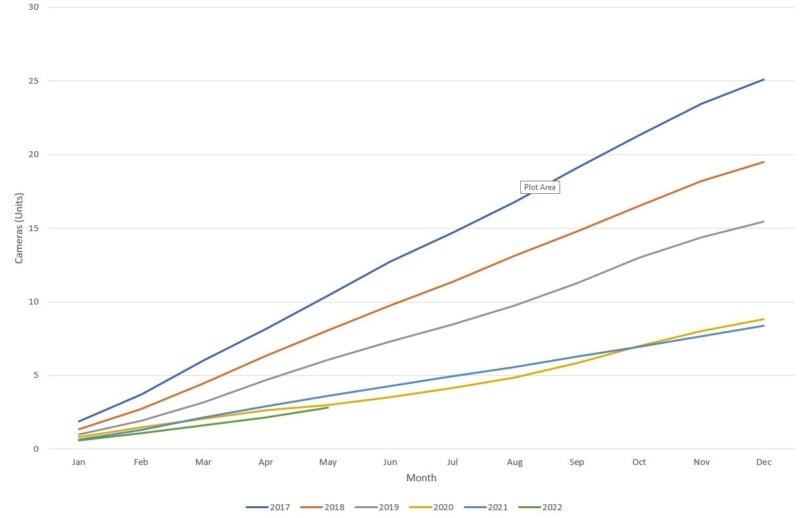 However, it’s important to dig deeper into the numbers, as the camera market is more than the sum of its shipments. This is because manufacturers ignore the smartphone camera segment entirely and similarly we have to ignore the built-in camera segment as it hides a lot of the details of what is really going on.

The reason for this is clear looking at 2021: they achieved 36% of shipments but only 15% in value. The market is focused on DSLRs and Mirrorless, however, we know that DSLR is a declining market and the key question is how fast mirrorless is taking over.

In 2021, mirrorless devices shipped 37% of units but held 66% of value. Clearly all new development happens here and customers pay top dollar, while the DSLR segment reflects older technology being sold at lower prices (it saw 27% of shipments last year, but only 19% in value).

The chart below reflects what has happened so far this year and it shows a surprising shift in the market. The dotted lines show the number of units shipped per segment, with all segments between 150,000 and 200,000 until March, where there is a drastic change for the mirrorless which climbs to over 350,000 units in May .

However, the real news is in the value of these shipments: in-cameras and DSLRs have stagnated at around 5 billion yen (about $36 million), while the mirrorless segment has accelerated to 50 billion yen (about $350 million). Yes, mirrorless devices in May accounted for 58% of unit shipments and 82% by value, compared to 47% and 75% respectively for the year so far. 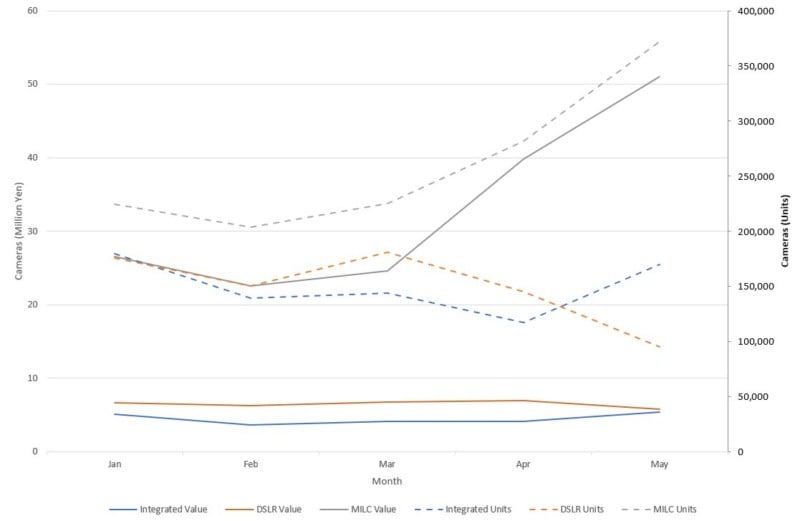 So, what are the main lessons of the evolution of the year? First, the sales volume seems to be down again and probably less than 8 million units in total.

However — and secondly — the value of these shipments is actually at the top and looks likely to match pre-COVID 2019 levels, which is great news for the industry.

Third, the decline in units comes mainly from built-in cameras and DSLRs. The latter has no real development and it is possible that Nikon and Canon let sales dry up naturally. That said, Nikon’s endgame for DSLRs could well be a quicker production shutdown and the numbers could reflect that.

Fourth, the mirrorless is where all the action takes place and that changes quickly. Not only are they representative of the majority of shipments, but all the money is in this segment. If you’re not committed to mirrorless, you’re not in the game. Canon, Sony and, to some extent, Fujifilm have all benefited from corner sales. Nikon, Olympus and Panasonic still represent the niche and Pentax remains committed to the DSLR. By the end of the year, we should have a much better idea of ​​where each builder fits into the puzzle.