Take a beautiful subject, impressive conditions, create a nice composition and you’ll get a great shot. But something important is still missing to take it to world class. Therefore, we must go even further.
In my latest YouTube video about going the extra mile to bring your photography to art, I took my audience with me to a photo spot in the Austrian Alps, where I planned an epic photograph there. five or six years. I have visited this place several times in the past to think about my options and create a composition to get a masterpiece. The only thing I was waiting for was good weather and good light conditions.

Achieving a world-class image isn’t about picking a nice composition and placing your subject according to the golden ratio and hoping for a tranquil lighting situation. Our photography must say something. The composition as well as the light must support the story. And it can only work when they fit together. But in order to do that, we must first clarify the story. There are many ways to find a story. For the photography in the video mentioned above, I took a deep interest in the story behind my photo spot, which is often a pretty good approach. In the 18th century there was a terrible accident with a horse-drawn carriage. It was hit by a rock in the mountain beside the road and plunged into the water, and everyone inside drowned. That is why they placed two crosses on the rock, in remembrance of the tragic accident.

So my photo spot was nothing where I would try to find a quiet light situation for a happy photo. Emotions are quite important here, and to express them, we need to bring good humor to our image. I opted for the red sky, because it conveys a mysterious and even disturbing atmosphere. Red skies are easy to predict: you just need the right clouds in the right place, with sunlight shining on them. But you also need to make the sun set or rise exactly where you want the red sky to end. And for this particular place, there are only twice in the year when it sets to get the reds exactly between the mountain on the left side and the rock with the crosses. I’ve waited long enough for these weather conditions.

One of the most important things in fine art photography is connecting to the scene you want to photograph. Therefore, I have visited this place many times, not just for photography, just to understand it. Since my children got their driving license a few years ago, I practiced a lot with them, as is often the case here in Austria. And guess where we drove most of the time. I was obsessed with this place, and I was so sure of the story I wanted my image to tell: the story of a tragic accident where people died. Therefore, the red sky was the correct weather scenario for me.

In the end, I was so happy that I got the conditions I was hoping for after waiting years. And in the end, I managed to get my picture exactly as I expected. 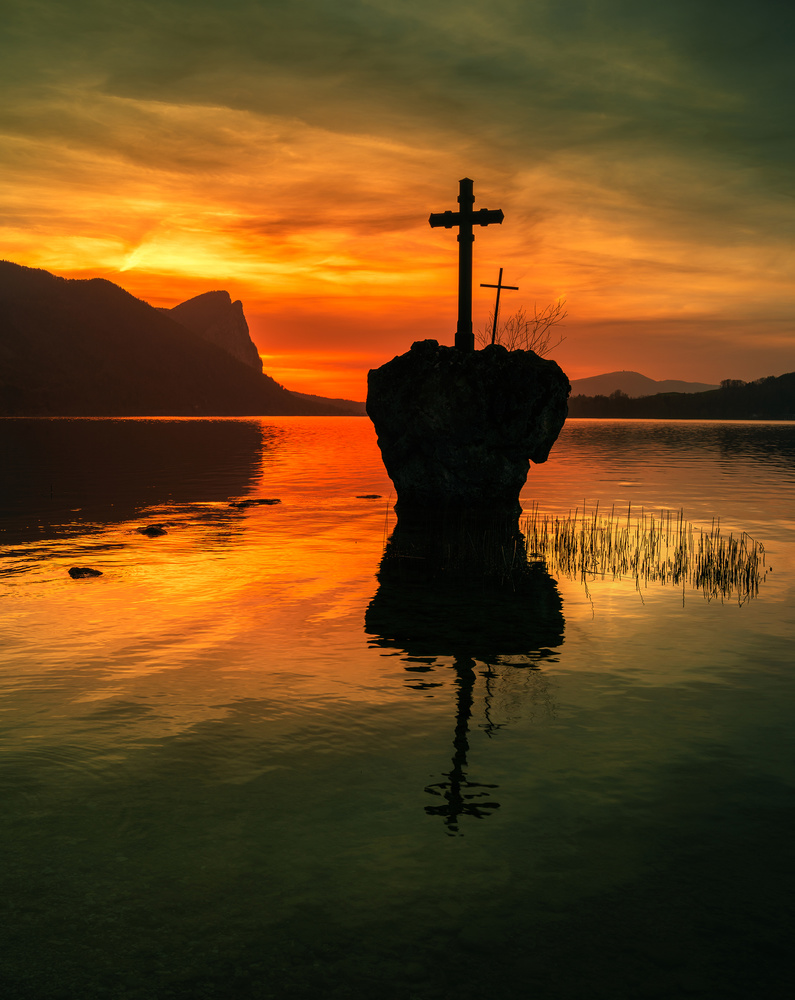 After sunset, the sky turns a dramatic red. The choppy sky and the moving water supported the tragic story. The water distorted the cross reflection dramatically so it created a fantastic contrast to the real cross on the rock. I saw the story of life and death. He was telling a story. It was already a work of art. But there was still something missing. At first, I didn’t really know what it was.

Bring it to a masterpiece

The photo spot was close to a busy road with a parking lot, and since it was Friday night, lots of young people gathered there with loud music and they left their engines running. It was so strong, and as I focused on the crash of the time and the poor souls, I thought: how could they ever find peace here? 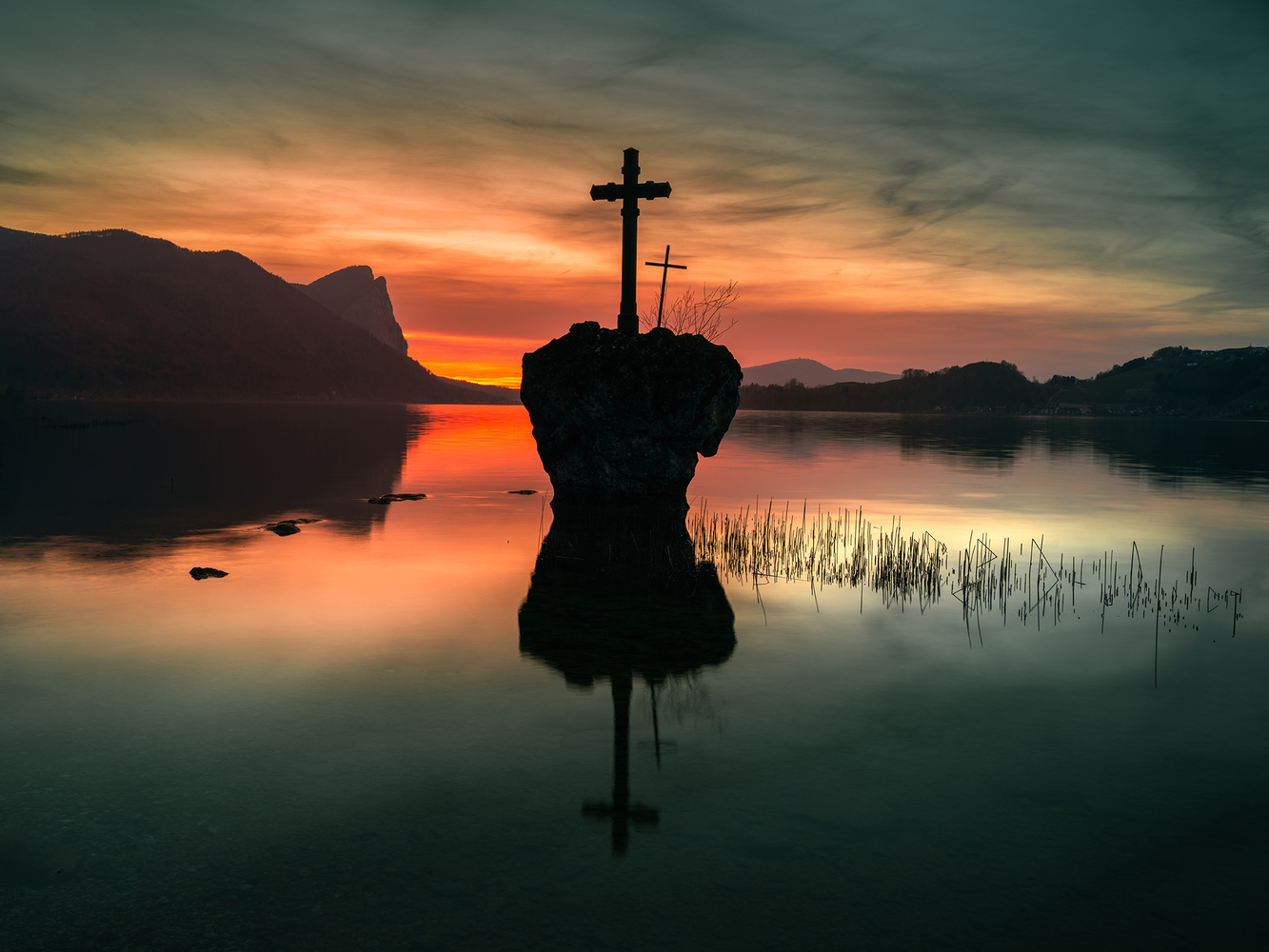 As I engaged in my composition, I suddenly realized that the reeds right next to the rock were increasingly illuminated by the reflection of the sky. And suddenly I saw the missing part of my story: I put the drama in my image, but the poor souls needed relief.

I decided to switch from portrait to landscape orientation and get more of the reeds right next to the rock in the frame. The illuminated area not only balanced out the red sky on the left side from a visual weight standpoint. It also balanced the story. Shutter speed was also very important here. For the first shot in portrait orientation, I went with a shorter shutter speed to add drama. For my final image, I exposed much longer to emphasize the peace in the image, which was also supported by bringing the rock to the center of my frame. The sky brought enough drama into the picture. It was all about bringing a bittersweet vibe to the scene.

Leave me a comment below on how you feel when you look at the final photo. And to experience the full photography adventure, watch the video mentioned above, where I reveal many more landscape photography tips, how to bring art to photography, and how to master red sky photography.