They say fashion and art move in cycles; what was once popular will become popular again after a while. There is no better example of this cyclical movement than the present. Whether it’s vinyl, movies, bootcut jeans, or anything that looks ‘retro’, Millennials and Gen Z seem like they need to get their hands on it. Because of this retro revival, our team at Filtergrade has compiled a list of another item that’s facing a huge resurgence: vintage camcorders. What better way is there to get the “old” and “retro” look than to buy a camcorder that was literally built during the time period you’re trying to recreate? Keep reading for 6 of our favorite camcorders that give you that vintage feel you crave!

After scouring forums, blogs, and websites on the internet, the general consensus is that the PV-L559 is definitely the best all-around vintage camcorder. This camcorder from the 1990s is known for its relatively good quality images and long battery life (at the time) of 2 hours per charge. In addition to these features, the L559 has an insane zoom: 150x digital and 20x. You could probably get decent pictures of people on the nearby continent with this camera!

The zoom is great and all, but it’s basically useless if the camera itself isn’t stable. Fortunately, the L559 has electronic image stabilization, which not only keeps zoomed images stable, but also helps improve the camera’s low-light functionality. Finally, its small size and relatively light weight (6 pounds) makes it super portable and ready to shoot when you need it! 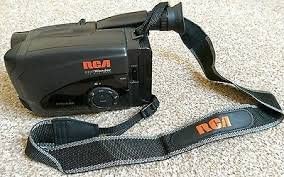 If the L559 is too expensive or the images are too high resolution for your taste, look no further than the RCA CC641! It doesn’t have the stabilization or zoom of the L559 (the RCA’s zoom is only 18x optical), but it’s extremely beginner-friendly, and it still has some awesome features. First, the RCA gives you the option of using removable storage (card/disk/tape), which eliminates the need for a VCR. This is an extremely handy feature these days when it’s nearly impossible to find a VCR that isn’t at your grandparents’ house.

Another really cool feature that comes with the CC641 is its auto white balance feature. This basically means that the camcorder can detect the change in light in a scene and it will automatically adjust its white balance so that colors are always normal and accurate. The fact that such a cheap camcorder made in the late 90s has this feature is still amazing. Along with that, the CC641 also features both autofocus and focus lock, so both new and experienced videographers don’t have to worry about the focus of the video. Finally, this camera is so compact and light that you would probably forget you had it on you. He does not have the nickname “Little Wonder” for no reason! The third camera on this list is the Sony DCR-VX1000 Digital Handycam. These days, this camera is a bit more expensive, but it’s a professional camcorder with a lot of really cool features. This camcorder has both optical and digital zoom (10x and 20x respectively) and an anti-shake function. Additionally, the VX1000 also has night vision and time lapse capabilities, making it one of, if not the most advanced camcorder on this list. Finally, the fact that it can shoot at 60 fps really makes it a tech star, and while it’s more expensive and shoots better than any other camcorder on this list, its prestige and history are the reason why. which I felt like I should include it.

Going into the history of the VX1000, the real reason this camcorder is so popular is the way it has been used in various subcultures. The portability, durability and availability of different interesting focal length accessories made the VX-1000 a hit with the underground skating and BMX community in the early 2000s. Many of those old “retro” skating videos we seen popping up on social media these days were actually shot with this camcorder! This camera is also very personal to me as my family owned one for a few years, and I played with it a lot when I was a kid. Whether you’re a beginner or just want another camcorder for your arsenal, I would seriously recommend the VX1000. 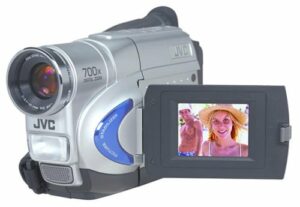 Then we have the JVC GR-SXM260U, a camcorder with many great features. The first thing I have to mention is the zoom; the GR-SXM260U has 700x digital zoom and 16x optical zoom. If I said the Panasonic PV-L559 could record decent footage of people on other continents, then this camcorder could record people on other planets! Not only that, but the built-in Image Stabilizer will help you maintain that focus and quality even as you move around and zoom in on your subject. The GR-SXM260U, like the previous Sony, is also super light and portable, and like the L559 it also has a 2 hour battery life.

Ok, enough with all those annoying features; let’s get into the really cool thing about this camcorder. The GR-SXM260U has 3 different recording modes: super VHS, VHS ET and standard VHS. Super VHS mode gives you about a 60% improvement in typical camcorder quality, and it uses S-VHS tapes as opposed to regular VHS tapes. Standard VHS mode is exactly what it says: standard resolution recording on a typical VHS tape. The super VHS ET is however the most interesting mode. This will allow the GR-SXM260U to shoot in high quality similar to super VHS, but it stores footage on regular VHS tapes, meaning this mode will give you the most quality and economy. Whichever mode you use, the GR-SXM260U will give you great camcorder images! 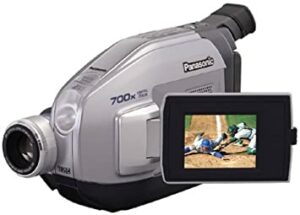 The Panasonic PVL353 VHS-C is a camcorder that at the time tried to distinguish between “old” and “new”. Although the PVL353 was made in the 90s, looks like an old camcorder, and doesn’t have the best display quality, it does have some features that were brand new when this model came out. For example, the PVL353 features dual electronic stabilization, which is probably the most advanced form of in-camera stabilization on this list. This stabilization, coupled with nearly identical zoom power to the previous JVC, will ensure that your videos don’t shake, even if you zoom in relatively close.

In addition to stabilization features, the PVL353 also has Color Digital, which was a top feature at the time. Color Digital is essentially an internal color sensor that detects and registers colors at extremely high speed and with an astonishing level of accuracy. A major complaint from creatives these days is that new technology just doesn’t seem to be able to replicate the colors and tones of old technology. Fortunately, the PVL353 ensures that the colors match exactly what you’re looking for every time. 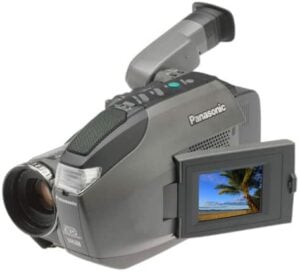 Well, it’s been a wild ride, but it’s time for the final camcorder on this list. Curiously, the first and the last camcorder are almost exactly the same, but with a few key differences. The Panasonic PV-L550 is essentially the beginner’s version of the L559. Now, I know some of you might ask why I would even include this camera on the list, but please hear me out. Even though I said it was the beginner version of the L559, it has its own qualities that must be appreciated. It doesn’t have the advanced features and buttons of the L559, but if you’re looking for a ton of features, you might as well ditch the camcorders and get a Blackmagic.

It’s also not like the L550 has absolutely no features. It still has 150x digital zoom and 18x optical zoom, and it still has electronic image stabilization to help with any camera shake. It also has a 3-hour battery life, which is an hour longer than the more advanced L559. The tapes are also very easy to remove when the recording is done, and you can just put them straight into a VHS PLAYPAK, if you have one. Finally, a very surprising feature on such a cheap and relatively unadvanced camera is the Auto Color Enhancement Light, which helps compensate for all low-light situations by improving image quality, hue and color. facial coloring. “Beginner” who?

Good, you have it now. It’s been an absolute journey with you guys. These 6 camcorders all have a place on this list, whether it’s because they get that perfect “retro” look, or because they’re a cult classic that permeated various subcultures in the late 90s and into the early 2000s. However, don’t limit yourself to these 6 choices. I don’t have enough time to write about every vintage camcorder in history, but really, if you’re looking for a vintage camcorder, I’d say the best by far is one that’s affordable and available, no matter what. either. is. Ultimately, people buy these camcorders for the relatively “poor” quality they provide, so I guess worse might be better in this case. Whatever you decide, I hope you learned something and found the camcorder of your dreams!

Related: 10 of the BEST Lights for Commercial Videography